Paul Manafort accused of lying to US special counsel 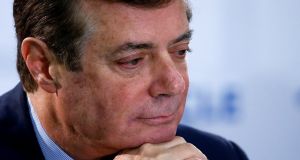 Paul Manafort could spend the rest of his life in prison, experts said. Photograph: Reuters

US president Donald Trump’s former campaign chairman Paul Manafort breached his plea deal by lying to federal investigators, US prosecutors said in a court filing, signaling a potential setback to the special counsel’s probe into Russia’s meddling in the 2016 US presidential election.

Mr Manafort said in the same filing on Monday that he disagreed with Special Counsel Robert Mueller’s assertion that he had lied, but both sides agreed the court should move ahead and sentence him for his crimes.

Without a pardon, the 69-year-old Mr Manafort could spend the rest of his life in prison, experts said.

The surprise development comes at a critical time for Mr Mueller, who is expected to finalize a report in the coming months on the findings of his 18-month probe into Russia’s election meddling and possible collusion with the Trump campaign.

While not a fatal blow, the dissolution of Mr Manafort’s plea agreement means Mr Mueller is losing the contributions of a witness with deep ties to Russia and who ran the Trump campaign as it took off in mid-2016.

“It’s bad for the overall Mueller investigation,” said Patrick Cotter, a criminal defence lawyer in Chicago and former assistant US attorney in New York. “He’s got one less witness today.”

Still, Mr Cotter said, it did not mean Mr Manafort’s co-operation had not been of any value, noting he may have led Mr Mueller to other sources of information.

Mr Manafort was a long-time Republican political consultant who made tens of millions of dollars working for pro-Kremlin politicians in Ukraine before joining the Trump campaign in March 2016, promising to work for free.

Mr Manafort attended a meeting at Trump Tower in June 2016 with a group of Russians offering “dirt” on Democratic candidate Hillary Clinton, who lost in an upset to Trump in the vote that November.

His long-standing relationship with an oligarch close to Russian president Vladimir Putin was another reason Mr Manafort’s co-operation was seen as important to Mr Mueller’s probe.

Mr Manafort started co-operating in September after pleading guilty in a federal court in Washington to conspiracy against the United States - a charge that included a range of conduct from money laundering to unregistered lobbying. He also admitted that he tried to tamper with witnesses.

Mr Mueller said in the filing that after signing the plea agreement “Manafort committed federal crimes by lying to the Federal Bureau of Investigation and the Special Counsel’s Office on a variety of subject matters.”

Prosecutors did not provide details of the alleged lies but said they would do so before sentencing.

Mr Manafort’s attorneys said Mr Manafort met with the government on several occasions and made “an effort to live up to his co-operation obligations,” according to the joint filing, which was submitted to US District Judge Amy Berman Jackson in Washington.

Rudy Giuliani, who represents Mr Trump in the Russia probe, said Mr Mueller’s team had crossed an ethical line between a search for the truth and exerting too much pressure on Mr Manafort.

“They are trying not to get a witness to sing, but to compose,” he said in an interview with Reuters on Monday night.

The breakdown in the plea deal means that Mr Manafort will almost certainly be hit with a harsher sentence - both for the crimes he pleaded guilty to in Washington and for his conviction in August in a separate case in Virginia on bank and tax fraud.

Mr Manafort was likely facing about 10 years in prison - a statistical life sentence given his age - for the eight guilty counts in the Virginia case alone, sentencing experts have said.

But the development also raised speculation that Mr Manafort may be seeking to curry favor with Mr Trump or protecting other associates who worked on the campaign.

Mr Trump has been vocal in his support for Mr Manafort, lauding him as a “very good person” during the Virginia trial. And when asked directly about the prospect of pardoning his former campaign chairman, Mr Trump has not ruled it out.

“It seems to me he’s angling for the pardon,” said David Weinstein, a former federal prosecutor in Miami. - Reuters

Two in custody after Ryanair flight to Dublin forced to divert 07:12
North businesses left ill-prepared for post-Brexit trade, report warns 00:01
Wearing face coverings in shops to be made mandatory in England 22:40
California shuts down again as US coronavirus cases surge 22:23
Body found at lake in search for missing ‘Glee’ actor Naya Rivera 21:29

1 Mandatory quarantine and flight cancellations unlikely despite rise in cases
2 California shuts down again as US coronavirus cases surge
3 Two in custody after Ryanair flight to Dublin forced to divert
4 Cowen under pressure to answer further questions on gardaí encounter
5 Half of Covid-positive workers in meat plant were asymptomatic, reports show
Real news has value SUBSCRIBE