Lawyer given jail sentence for lying to Mueller’s investigators 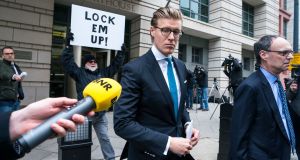 Alex van der Zwaan (C) walks out of a Washington, DC, courthouse after being sentenced to 30 days in prison. Photograph: Jim Lo Scalzo/EPA

The Dutch son-in-law of one of Russia’s richest men was sentenced in Washington, DC, on Tuesday to 30 days in prison and fined $20,000 (about €16,000)for lying to Special Counsel Robert Mueller’s investigators about contacts with an official in US president Donald Trump’s 2016 election campaign.

Alex van der Zwaan, a lawyer who once worked closely with Trump’s former campaign chairman Paul Manafort, was also sentenced by US district court judge Amy Berman Jackson to two months of supervised release. He said he was sorry for what he had done.

He pleaded guilty on February 20th as Mueller intensified his investigation into potential collusion between the president’s campaign and Russia, and told prosecutors he had lied to FBI agents about previous communications with Rick Gates, a Manafort protege who held a senior position in the Trump campaign.

Van der Zwaan (33) previously worked for the law firm Skadden, Arps, Slate, Meagher and Flom and is married to the daughter of prominent Russian billionaire German Khan, founder of the privately owned Alfa-Bank.

Van der Zwaan worked closely with Manafort and Gates in 2012, before their involvement in the Trump campaign, when they were serving as political consultants for Ukraine’s former pro-Russia president Viktor Yanukovych on a report about former Ukrainian prime minister Yulia Tymoshenko.

Mueller has secured two indictments against Manafort arising from his lobbying for the pro-Russian Ukrainian Party of Regions, with charges including failing to register as a foreign agent, conspiring to launder money, bank fraud and filing false tax returns. Manafort has pleaded not guilty. – Reuters