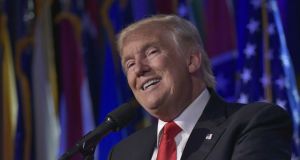 All times are New York time

As the first polling stations closed in the eastern United States, early results from a national exit poll brought heartening news for Hillary Clinton. It showed that a clear majority of voters believed Donald Trump had neither the temperament nor the experience to be president. The poll also suggested big turnout among Hispanic voters, a trend that would favour Clinton in key swing states such as Florida and Nevada. At the Trump election night party at the Hilton hotel in midtown Manhattan, reporters were asking the Republican nominee’s spokesman if he had written a concession speech. An impression that the Trump camp was bracing itself for a defeat was reinforced when Kellyanne Conway, the campaign director, criticised senior Republicans for failing to support the candidate. A few miles away, at Hillary Clinton’s election night party at the Javits Center, supporters were confident.

8pm: Signs of a Republican surge in Florida

Florida, the biggest swing state on the map, had been one of the most competitive races of the campaign. Both sides had blitzed the state in the weeks leading up to election day, throwing money and energy into a state whose 29 electoral votes would be a big step towards the required total of 270. At 8pm, the race was too close to call, but Republicans quickly latched on it as a source of hope for Trump. Democrats had indeed succeeded in mobilising Hispanic voters in the south of the state, it turned out, and Clinton performed strongly in several of the swing counties in the centre of the state – the strategy that had delivered Florida for Barack Obama. But Trump was not only still in the race. He was ahead. Rudy Giuliani, the former mayor of New York and one of Trump’s closest allies, appeared on television. He sounded bullish about Florida. By now more than 80 per cent of the votes had been counted and Trump had a lead of about two percentage points. It was a lead he wouldn’t lose.

No Republican had ever won the presidency without taking Ohio. At 10.25pm the TV networks declared it for Trump. By now a shock was clearly on the cards. Within 15 minutes, North Carolina was called for Trump. Suddenly, his route to 270 – considered exceptionally narrow on the eve of the election – was opening up. When the conservative Fox News interrupted its coverage to report that the New York Times was estimating Trump’s chances of victory at 91 per cent, the studio went silent for a moment, as if the anchors could not quite believe it. There was a similar reaction at the Hilton, where the results from Ohio and North Carolina were greeted with a somewhat restrained burst of applause. Trump’s supporters were still cautious; there were many states still to be called. But by now the the betting markets were all pointing to a Trump win, and dollar stocks were on the slide.

When Trump paid late visits to the Upper Midwest states of Michigan, Wisconsin and Minnesota last week, it was widely seen as a sign of desperation. With his most likely routes of 270 electoral votes narrowing elsewhere in the country, it was assumed, Trump was throwing the dice one last time in the hope of finding a chink in Hillary Clinton’s “blue firewall”. When Wisconsin was declared for Trump at 11.30pm, that wall began to collapse. By now Trump was looking safe in Florida and Utah, thrusting him into a virtually unassailable position. At this point, it was Clinton’s path to 270 that was contracting. With Wisconsin gone, Michigan and Pennsylvania became must-wins. She was looking vulnerable in both. At the Trump ‘victory party’, the crowd was now jubilant. “USA! USA!” and “Lock her up”, his supporters began to chant.

12.30am: Republicans hold the House

Democrats had gone into the election hopeful of taking control of the Senate and with an outside hope, if Clinton performed very strongly, of winning a majority in the House of Representatives for the first time in six years. Not long after midnight, however, with the Associated Press projecting that the Republicans would retain control of the House and the Democrats struggling to make sufficient progress in key Senate races, Republicans for the first time allowed themselves to ponder a remarkable scenario. If things remained as they were, their party would control the White House, the Senate and the House for the first time since 1928. At 1.20am, victory for the Republicans in the Pennsylvania Senate race confirmed that great prize was theirs. “Never been as wrong on anything on my life,” tweeted the former Obama strategist David Plouffe.

With the networks calling Pennsylvania for Trump just after 2am, Hillary Clinton’s last remaining routes to victory were finally closed off. Her campaign manager, John Podesta, appeared at the Javits Center and tolddistraught supporters to go home. Meanwhile, Clinton called Trump and congratulated him on his victory. By the time Fox News declared Trump the winner, he was already standing off-stage at the Hilton, ready to make a grandiose entrance with his family. “The unthinkable has happened,” said the Fox anchor. A deafening roar went up.