Irish oak planted at US Capitol to commemorate 1916 Rising 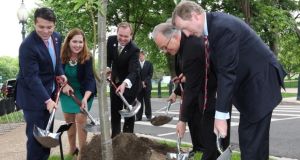 There were no jokes about whether the new Irish oak would lean left or right when liberal Democrat congressman Brendan Boyle and his conservative Republican counterpart Mick Mulvaney joined Taoiseach Enda Kenny to plant a tree in honour of Ireland on the grounds of the US Capitol.

Wednesday’s ceremony was all about the strong roots the Irish have put down in the United States over the centuries. It is quite an honour for Mother Ireland to have a tree planted for her at the Capitol. Irish Senator Mark Daly, who came up with the idea to commemorate the leaders of the 1916 Rising, was told in a letter from Boyle in April that it “only happens three or four times a century”.

Tree planting on the historic grounds must follow the original landscape developed by architect Frederick Law Olmsted in 1874.

The plaque at the new tree – “quercus petraea (Irish oak and dair Éireannach)” – reads “sponsored by the 1916 Easter Rising Centennial Caucus, to honour the 100th anniversary of Ireland’s 1916 Rising”.

Mulvaney had a dig at the English at the ceremony, noting that there used to be an English oak on the site: “That one didn’t last 500 years and this one will.”

He pointed out that among the congressmen at the ceremony were a Boyle, a Crowley, a Kennedy and an O’Rourke, showing the ties between the two nations.

Boyle made reference to the historical significance of the tree’s location.

“Today and for ever more patriots like Pearse, Plunkett and Connolly will be honoured on the same ground that honours Washington, Jefferson and Madison and that’s how it should be,” the son of a Donegal man said at the tree-planting ceremony.

The event was witnessed by Fianna Fáil’s representatives at the event, Seán Haughey and Éamon Ó Cuív, grandsons of Rising veterans. “It is intriguing Éamon De Valera and Sean Lemass were in the Rising, they were taoiseach and tánaiste and here the two of us are today,” said Haughey, standing next to the tree.

In the spirit of the new “partnership government” that the Taoiseach talked about in all of the speeches he delivered in Washington, he made a generous gesture to the two Fianna Fáilers. He gave them a lift in the motorcade to Dulles Airport outside Washington on Wednesday night to meet the flight they were all on back to Dublin.

At the tree planting, Kenny drew the analogy of the big Bur oak [native to North America] beside the little Irish oak being Ireland “in the shadow of the big protector”, the United States.

“Like the leaves on the tree represent in my view the men and women of Ireland, children who have come here, generation after generation – just as those leaves renew themselves each spring and summer, so too do the connections and the generations of engagement between Ireland and the United States,” the Taoiseach said afterwards in a ceremony in the majestic Statuary Hall in the Capitol building.

Among the statues around the Taoiseach in the hall were examples of the mark left by the Irish on the American legislature: Maryland’s first senator Charles Carroll, grandson of an Offaly man and the only Catholic to sign the Declaration of Independence; John McLoughlin, the “Father of Oregon” whose grandfather left Donegal in the early 18th century, and Andrew Jackson, the seventh US president, whose parents and two brothers were born in what is now Northern Ireland.

The House of Representatives and the Senate this week unanimously passed resolutions “commemorating the 100th anniversary of the 1916 Easter Rising, a seminal moment in the journey of Ireland to independence”.

Many acorns will likely have fallen from Ireland’s new tree by the time Congress agrees on a legal journey for new arrivals from Ireland and elsewhere.