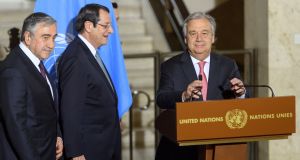 Talks to resolve the division of Cyprus are close to a settlement, the UN secretary general António Guterres has said, but he cautioned against expectations of a miracle.

The talks will enter a fifth day on Friday, with the attendance of the Greek prime minister Alexis Tspiras, the Turkish president Recep Tayyip Erdogan and Theresa May not being ruled out. However, they are only likely to travel if a big breakthrough occurs in further discussions late on Thursday.

Flanked by the Greek Cypriot leader, Nicos Anastasiades, and the Turkish Cypriot leader, Mustafa Akinci, Guterres said “enormous progress” had been made on internal island issues such as property, future boundaries and relations with the European Union.

But speaking on the fourth day of reunification talks in Geneva, he said instruments were still needed to implement new security guarantees satisfactory to both the Turkish Cypriots and Greek Cypriots.

Sources said it was conceivable the talks staged all week in Geneva would extend to Friday or even Saturday. But even then, they said, the best expectation was that only a framework agreement could be reached. The meeting is being attended by foreign ministers from the three guarantor countries – Turkey, Greece and the UK as the former colonial power. Boris Johnson, the UK foreign secretary, is at the heart of the negotiations. It is the first time the island politicians have formally discussed security guarantees in detail.

Britain is offering to reduce the territorial size of its military bases by nearly half. Separately, the UK has said it is up to the other parties to decide if they wish it to continue in its guarantor role. It could end, but only if the Turkish Cypriot and Greek Cypriot communities agree to a new arrangement.

Greece is pressing for the 30,000 Turkish troops to leave the island over a fixed timetable, and for Ankara to end its right to intervene. Turkey has so far refused to make that concession, but is widely agreed the deal on security – probably the most difficult part of the talks – is dependent on how favourably the two communities view the agreement on the internal dossiers on governance, boundaries, compensation, the economy and relations with the EU.

Turkey is demanding all Turkish Cypriots receive full rights to EU membership. Mr Guterres stressed no one was looking for “miracles or a quick fix, but a solid and sustainable solution”.

“Our goal here is to get the necessary results and to do that we want to work seriously for the amount of time that is necessary,” he said. “We are facing so many situations of disaster, we badly need a symbol of hope. I strongly believe Cyprus can be the symbol of hope at the beginning of 2017.

“We are coming very close to settlement in relation to the creation of a bizonal bi-community federal institution in the republic of Cyprus.” But he stressed this needed a security guarantee to underpin the deal.

Mr Guterres said a deal was needed that satisfied both sides, pointing out any agreement would have to be put to the two communities in a referendum. He added: “Looking at what is happening in the world referenda are not an easy challenge.”

The island was split in a Turkish invasion in 1974 triggered by a coup organised by Greek and Greek Cypriot nationalists trying to unite the island with Greece.