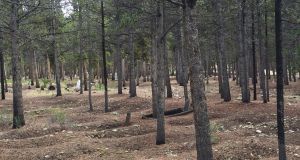 A good place to start was where people were buried. Historian Jim Walsh began his research about 13 years ago and, intent on finding out more about the history of 19th century Irish migratory miners in the Rocky Mountains, he thought of no better first stop than a Colorado cemetery.

In the old mining town of Leadville, about two hours west of Denver, high in the mountains, the Irish-American academic from Pennsylvania spotted a sign at the back of the Evergreen Cemetery that said “Old Catholic”. Strolling into the woods, he was stunned by what he found.

“I found myself standing in the midst of all these sunken, unmarked graves. I started checking records and I just knew that this is what I wanted to write about and talk about for my professional career. It has been a labour of love,” he said. When Walsh, now an associate professor at the University of Colorado Denver, examined the records, he found that about three-quarters of the 1,500 people buried in the unmarked section were Irish. They were miners or their relatives who died between 1877 and 1890 during a great silver rush that brought tens of thousands to the Rockies in search of work and fortunes.

Census records show that there were about 3,000 Irish-born people in Leadville in 1880, likely making the Colorado town, according to Walsh, the largest Irish community in the western United States outside of California. Almost a fifth of the town had some kind of Irish heritage. Of Leadville’s Irish-born, two in every five came from Allihies in west Cork, a village that exported considerably more than the famous copper that came from its mines. The names of Harrington, Sullivan and McCarthy were as common in Leadville as they were in their native Cork.

When Walsh counted the ages of the dead, he calculated the average at 23. “If you walk through that cemetery it is unimaginable how many children’s graves you come across,” he said.

At an altitude of 10,430 feet, the Irish in Leadville – known as “The Two Mile High City” and “Cloud City” and for a time as the highest incorporated town in the United States – endured brutal winters. Freezing cold and snowfalls of up to 30 feet at such high altitude made life hell. March is so cold here that Leadville holds its annual St Patrick’s Day Practice Parade in September. Frequent accidents and the grim conditions in the mines claimed the lives of many of the workers buried in the cemetery.

Working conditions were so bad that a 28-year-old Dublin-born miner, Michael Mooney, led thousands of miners out on strike in the autumn of 1880.

There were fights between prostitutes over the merits of being born in Connacht or Munster, reports of heavy drinking and cash-rich saloons, and mines named after Emmet, Wolfe Tone and Parnell.

The historian has even traced the footsteps of Leadville’s nomadic Irish miners back to the anthracite coal fields of Pennsylvania and the cities of Scranton and Wilkes-Barre, to Michigan, to Nova Scotia and even to Cleator Moor iron and coal mines in Cumberland, northern England.

“This unmarked area of cemetery is the greatest visual indicator that we have of the lives of the transient Irish miners who went west and drifted from mining camp to mining camp and never planted roots long enough for us to understand their lives,” said Walsh.

This year the descendants of the Leadville Irish delayed their annual St Patrick’s Day parade by a few weeks until next Saturday for a commemoration and a visit by Adrian Farrell, Ireland’s consul general in Austin, whose sphere of diplomatic coverage extends west to Colorado.

Ireland’s man in Texas will attend a commemoration of the Irish immigrants buried in Evergreen Cemetery where, he said, he would like to see how the burial grounds “could be cared for more appropriately and with more dignity for those who rest there”.

“Ultimately, I’d also like to establish a more permanent memorial to these Irish who endured such incredible hardship,” said Farrell.

Walsh agrees. He hopes that one day there will be a permanent memorial to Leadville Irish.

“The Rocky Mountain region has never had a marker for the Irish and their contribution in these mining towns,” he said.

“We don’t just see this as a memorial to the Leadville Irish but to the thousands of Irish who went to the Rocky Mountains and mined and suffered a lot of hardship.”