Breaches of etiquette hit the US in the past week, first with Will and Kate and then president Obama 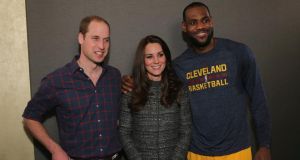 The US was just recovering from the royal visit of Wills and Kate to New York and Washington when the tabloid gods rained down another celebrity news gift with leaked racist emails between two Hollywood executives about the kind of movies President Obama might enjoy.

As if the arrival of the Duke and Duchess of Cambridge wasn’t enough. The American media appeared spellbound at times by the protocol Buckingham Palace insists must be observed around the “Dook” – as one television anchor described him – and his wife.

NBA king LeBron James received a royal whack – well, from the British media at any rate – when he was photographed in a sweaty post-game shirt with his long arm around Kate Middleton after the Cleveland Cavaliers beat Brooklyn Nets in New York.

Comparisons were made to the royal faux pas committed by first lady Michelle Obama when she put her arm around Queen Elizabeth during a reception at the G20 summit in the UK five years ago.

At the game itself, the royal couple were photographed with pop stars Beyonce and Jay Z, prompting one American media wag to tweet a photo with the message: “Royalty. And Will & Kate.”

Even in advance of the visit, US journalists were rattled by the strict “smart attire” dress code applying to royal visits and the requirement for men to wear a shirt and tie and women a trouser or skirt suit. Trainers were banned, which caused confusion among the Washington press corps until it was clarified that the Brits meant “sneakers.” (Typical Washington dress, for the many political staffers/wannabe presidents at least, comprises ill-fitting khaki trousers, a light-blue shirt and dark blazer, plus the customary lanyard to guarantee passage through the gauntlet of metal detectors in this city.)

In the end, the palace relaxed the rules so everyone could bask in the royal glow and watch for the inevitable etiquette breaches.

On the other US coast, a suspected computer hack exposed far more serious transgressions of etiquette. Emails between Hollywood producer Scott Rudin and Sony Pictures Entertainment co-chairwoman Amy Pascal showed what passes for high-level banter in Hollywood these days.

The hacked-and-leaked emails, revealed on the websites Buzzfeed and Gawker on Wednesday, were exchanged before Pascal attended a Hollywood fundraising breakfast attended by Obama and hosted by studio boss Jeffrey Katzenberg of DreamWorks Animation.

“What should I ask the president at this stupid Jeffrey breakfast?” Pascal emailed Rudin. “Would he like to finance some movies,” he replied. “I doubt it. Should I ask him if he liked Django?” Pascal wrote. “12 YEARS,” replied Rudin, referring to the film, 12 Years a Slave, and going on to suggest other films produced and starring African Americans that Obama might like because he is black.

Grovelling apologies soon followed. “I made a series of remarks that were meant only to be funny, but in the cold light of day, they are in fact thoughtless and insensitive – and not funny at all,” said Rudin in a statement to the Hollywood trade news website, Deadline.

The private emails, he said, were “written in haste and without much thought or sensitivity, even when the content of them is meant to be in jest, can result in offence where none was intended.”

Pascal described their emails as “insensitive and inappropriate,” saying that they were “not an accurate reflection of who I am”.

The stolen emails were among a trove that had celebrity watchers salivating. In other emails, Rudin called Angelina Jolie a “minimally talented spoiled brat”, while screenwriter Aaron Sorkin dissed Irish-German actor Michael Fassbender in an exchange about who should play the role of Apple co-founder Steve Jobs in another biopic.

“I don’t know who Michael Fassbender is and the rest of the world isn’t going to care,” Sorkin told one film producer.

The emails were leaked by a group calling themselves “the Guardians of Peace” purportedly in response to a new comedy, The Interview, about an assassination attempt on North Korean leader Kim Jong-un.

They surfaced in the same week that a first-person article written by comedian Chris Rock in the Hollywood Reporter stirred a debate about race in the US entertainment industry.

“It’s a white industry. Just as the NBA is a black industry. I’m not even saying it’s a bad thing. It just is,” he wrote. Against this backdrop, the Rudin-Pascal emails raised questions about the level of unthinking racism even in a town counts itself as one of the most liberal in the country and an industry that in general is a strong supporter of Obama and the Democrats.