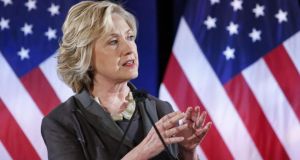 Hillary Clinton: “You can get lip service from as many white people you can pack into Yankee Stadium and a million more like it who are going to say: ‘We get it, we get it. We are going to be nicer.’ That’s not enough, at least in my book.” Photograph: Getty

The video is visceral and raw: Hillary Rodham Clinton – the presidential candidate so often faulted for insulating herself from voters and critics alike – in a tense, awkward, unscripted moment.

A Black Lives Matter activist demands, at great length, that Clinton acknowledge her culpability for supporting criminal justice policies put in place by her husband’s administration that wound up harming black Americans – and say how she would change “hearts and minds” to address what he calls a virulent strain of “anti-blackness” that reaches all the way back to slavery.

Clinton, after listening and nodding for several minutes, responds calmly that her life’s work has been helping the nation’s poorest children, many of them black – before turning the tables on the much younger man and demanding instead to know how he plans to turn his deeply felt emotions into meaningful, lasting change.

“You can get lip service from as many white people you can pack into Yankee Stadium and a million more like it who are going to say: ‘We get it, we get it. We are going to be nicer,’” she says. “That’s not enough, at least in my book.”

It was a forthright statement by Clinton, whose advocacy work dates to the 1960s. But her confrontation with a black activist in his 30s showed how, for all her decades of effort on behalf of civil rights, there is a generational divide between those who appreciate that résumé and those to whom she has to prove herself all over again.

The combination of patience and gentle scolding with which she responded seemed a distillation of Clinton’s worldview: that movement politics gets you only so far, and that activists must pave the way for those in office to act.

All in all, the encounter seemed to signal that racial justice will retain its potency in the Democratic primary contest – and potentially beyond, given the importance of black voters to a Democratic victory in November 2016. But it also showed Clinton as even her admirers lament that she is seldom seen: spontaneous, impassioned and seemingly unconcerned about potential repercussions.

The exchange, taped on August 11th, came after Black Lives Matter activists tried unsuccessfully to disrupt one of Clinton’s events in Keene, New Hampshire, as they have managed to do at campaign stops by other presidential contenders. Clinton agreed to speak privately with the group’s representatives. They have since described her remarks to reporters, but released excerpts from the video for the first time this week.

In the video, Clinton shows little of the soft-edged, convivial but careful persona she often displays at her staged campaign events. She is animated, serious and forceful, jabbing her finger at Julius Jones, a Black Lives Matter activist from Boston, as if she were arguing with a classmate back at Wellesley.

She seems to listen intently, her hands folded in front of her. She concedes that there were unintended negative consequences from her husband’s crime bill, but declines to say there was any racial undertone to that. Jones seems to press Clinton to bare her soul: “Now that you understand the consequences, what in your heart has changed?” he asks. “How do you actually feel that’s different than you did before?”

In clips of the meeting posted by Good Magazine, Clinton suggests that the activists need to have strong policy goals if they want to create real change, using the women's and gay rights movements as a comparison.

Clinton calls it a “very thoughtful question” but demurs. “This country has still not recovered from its original sin,” she says, but adds that the “next question” is, “So what do you want me to do about it?”

She urges Jones to help her come up with a specific “vision and plan.”

“That’s what I’m trying to put together,” Clinton says, “in a way that I can explain it, and I can sell it - because in politics, if you can’t explain it and you can’t sell it, it stays on the shelf.”

At another point, Clinton pushes back, and provocatively. When Jones tells her that she is “victim-blaming” and that the violence he wants to counteract is a “white problem,” Clinton retorts, “Respectfully, if that is your position, then I will talk only to white people about how we are going to deal with a very real problem.”

For any white Democrat, the Black Lives Matter movement poses problems, but for Clinton, it is particularly fraught. She and her husband were stung by allegations of racism that arose in her 2008 primary contest with Barack Obama.

“If you watch the millennial reaction to Hillary, it’s a very different reaction, because a lot of us came up during the ‘08 elections,” said Elon James White, an activist and founder of the website This Week in Blackness. “There is a very clear line in the sand.”

Clinton has the backing of many African-American leaders, including important members of the Congressional Black Caucus. But her support falls mainly on the older side of an increasingly pronounced generational divide, between long-familiar figures like the Rev Jesse L Jackson and a newer contingent that has begun to assert itself during the Obama administration.

“The racial justice community has changed over time,” said Marc H. Morial, the president of the National Urban League. He described the raw anger of the current movement as a result of a combination of several factors, including frustration at years of rhetorical head-pats from white political leaders about changing a policing and economic system that disproportionately affects African-Americans.

Clinton seems cognizant of that divide. Speaking in the video with Jones, she alludes to her involvement in the civil rights movement in the “old days.” Indeed, she comes to the issue with a great deal of credibility among African-American advocates and politicians of a certain age for using the existing systems to bring changes. She has told of being inspired by the Rev. Dr. Martin Luther King Jr. as a high school student, when she heard him speak in Chicago, and of being drawn into working for the Children’s Defense Fund by Marian Wright Edelman, her Yale law mentor.

As the first lady of Arkansas, she worked to improve one the nation’s poorest school systems, in which many of the students were black. As the nation’s first lady, she fought for health insurance for poor children.

Even now, in her second presidential bid, Clinton - often accused of being too cautious - has used some of her boldest language on issues of racial justice. Morial favourably cited Clinton’s speech before the Urban League in July, when she talked about inequities that have lingered despite other advances.

In another speech shortly after the massacre of nine black churchgoers in South Carolina, Clinton said that racism was not merely the province of “kooks and Klansmen.”

Minyon Moore, a longtime close friend and adviser to Clinton, said that her credentials on race could not be questioned, and suggested that the younger cohort of activists be willing to have more of a dialogue.

“She was one of the first leaders out there on race,” said Moore, one of several African-American women among Clinton’s innermost circle of friends and advisers. “What presidential candidate has asked the question, ‘Imagine for one second if you were a black man and the police stopped you? Imagine.’ If that’s not in a person’s heart, I don’t know what is.”