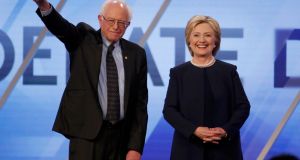 Hillary Clinton, rattled by her Democratic presidential rival Bernie Sanders’s upset in Michigan and what it means for upcoming state contests in the midwest, tacked hard to the left on immigration at the party’s debate in Miami on Wednesday.

The former first lady, senator and secretary of state was pressed by Jorge Ramos, anchor for Hispanic TV station Univision, whether she would continue Barack Obama’s legacy as “deporter in chief” and remove undocumented children and their parents from the US.

“I would not deport children. I do not want to deport family members either, Jorge,” Clinton responded at the party’s eighth presidential debate, attempting to shore up her “firewall” among minority voters.

“I want to, as I said, prioritise who would be deported: violent criminals, people planning terrorist attacks, anybody who threatens us,” she said. “That’s a relatively small universe.”

Clinton’s policy on the “undocumented”, one shared by Sanders, illustrated how far apart the Democratic race is from the Republican primary, where poll-topper Donald Trump and chief rival Ted Cruz say they plan to deport some 11 million illegal migrants.

Clinton appeared desperate in Wednesday night’s debate, seemingly frustrated at the staying power of Sanders, a self-professed democratic socialist and candidate she is still having to attack hard.

She accused the Vermont senator of supporting “Minuteman” vigilante patrols at the Mexican border to hunt down immigrants and objecting to the 2009 bailout of the auto industry – misleading claims that Sanders rubbished.

He accused Clinton of unfairly cherry-picking “pieces” of broader legislation that he supported in the Senate.

One of Clinton’s wilder claims was that Sanders had “sided with the Koch brothers” – the billionaire conservative benefactors so despised by liberals – in their mutual opposition to the Export-Import Bank and government-backed trade support it provides to big corporations.

Washington Post analyst James Hohmann described Clinton’s “high-school debate” tactic as “the spread”: “when you throw out so many arguments that your opponent cannot possibly respond to all of them”.

Admitting that it was “painful” for her to hear that only 37 per cent of Americans consider her honest and trustworthy, according to a Washington Post poll released on Tuesday, Clinton took responsibility for her failings.

“I am not a natural politician, in case you haven’t noticed, like my husband or president Obama,” she said. “So I have a view that I just have to do the best I can.”

Sanders’s wins, as narrow as some are, are prolonging the Democratic race and show Clinton’s best is just not enough for some in her party’s base.