First snakes on a plane, now sharks on a train 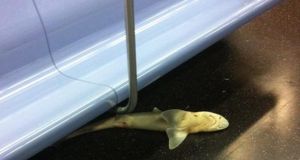 A photograph of the dead smooth dogfish lying inder a seat on a Queens-bound subway. Photograph: Gothamist

The Mustelus canis shark, referred to as the smooth dogfish, is known to skulk from the edge of New England to the Gulf of Mexico, off the coast of Brazil and along the shores of northern Argentina.

It is not native to the ocean-blue seats of a Queens-bound New York subway.

But there it was found yesterday morning, just after midnight, deceased beneath a subway bench, as passengers braved a stench that, even by transit standards, might have driven them away under ordinary circumstances.

Brandon Sanchez (20), noticed the shark, about a metre long and on its side, through a train window as the subway arrived at Canal Street. He stepped in with a friend, snapped a picture, and left to board a neighbouring car. He did not say a word to train staff. “I thought eventually they would find out there was a shark on the train,” he said.

And they did, a dozen stations later, at Queensboro Plaza, when a conductor called in a report for which there is no transit code: There was a shark in Car 8994.

When the train reached Astoria/Ditmars Boulevard, a supervisor pronounced the animal dead, placed it in a garbage bag and threw it away.

Before that, according to photographs published on the website Gothamist, at least one rider posed with the shark, placing an energy drink and MetroCard at its sides, and what appears to be a cigarette near its mouth.

The Metropolitan Transportation Authority said it was unclear how the shark had reached the transit system. “We don’t know,” said Kevin Ortiz, a spokesman for the authority. “And we are not investigating.”

The transit authority has “better things to do”, he added.

Inquiring riders were left to hazard their own theories. Was it vanquished in the Darwinian wilderness of New York City Transit, where rats are small in stature but large in numbers? Had it escaped from Chinatown, where shark-fin soup remains a staple?

Or had it been deposited by a Sharknado?

More cynical travellers observed that the animal had been found during the Discovery Channel’s “ Shark Week,” surmising that its appearance might have been a marketing ploy.

The channel bristled at the implication. “It deeply saddens us that someone would think that this was funny or in any way connected to our celebration of sharks,” a spokeswoman said in a statement.