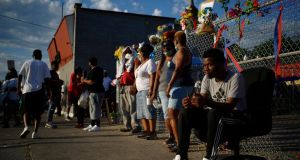 There’s not a whole lot to YaYa’s BBQ Shack in west Louisville. A line of barbecue pits made from barrels is lined up against a chain-link fence next to a car park. Several feet away is a small building from where its former owner, David “Yaya” McAtee, ran the business.

In the early hours of Monday morning, McAtee was shot dead by police officers when they, along with members of the national guard, attempted to break up a crowd of people violating a curfew in an adjacent shop forecourt. His body remained on the street for 12 hours.

Four days after the shooting, bullet holes are still visible on the wall next to where McAtee was gunned down. Mourners have come to grieve at a gathering spot where locals descend, often after a night out, for chargrilled burgers and chicken.

“We fed them for free; we made sure they had water, something to drink,” says McAtee’s nephew, Marvin McAtee, of his family’s relationship with the police. “The thing that hurts me is that when we had a memorial [for David] they didn’t come and offer their condolences.”

McAtee’s sentiments cut to the heart of the deep divisions between America’s black communities and law enforcement that have fuelled mass protests and unrest across the country for almost two weeks.

On the night of McAtee’s killing, Louisville, like dozens of other cities around the country, smouldered with anger. Protesters had gathered in the city centre to mark the killing by police of George Floyd in Minneapolis on May 26th, as well as the shooting dead of Louisville native Breonna Taylor – both African-Americans – while asleep in her home in March.

Based on video footage, police claim David McAtee “appears” to have fired his gun in the direction of the officers on the night of his death, a claim his family, including several members there on the night, reject. Louisville’s police chief was fired shortly after it was made known that the officers involved did not have their body cameras activated at the time of the incident.

Demonstrators in Louisville have also railed against illegal “no knock” warrants which, as happened in Taylor’s killing, see law-enforcement officers enter a property by force without identifying themselves first.

Adding to the rising resentment with police is that Katie Crews, one of two police officers involved in McAtee’s shooting who have since been placed on administrative leave had previously mocked a protester in a Facebook post, writing: “I hope the pepper balls that she [the protester] got lit up with a little later on hurt.”

A television news reporter was also targeted with pepper balls by police while covering a protest in Louisville last Sunday night.

As the outrage with police grows, many officers feel abandoned too. Early Wednesday morning, a Swat truck was fired upon while responding to an attempted ATM break-in on the same intersection where McAtee died. Later that day, hundreds of police officers, many working 12-hour shifts, walked out on Louisville mayor Greg Fischer as he entered a room to address to them.

One Louisville area police department has taken to Twitter to air their grievances with city authorities, saying: “[On June 2nd] as officers tried to respond to those calling for help, they were shot at, again and again. Police are here & WANT to help but cannot do that when they are vilified by their own mayor!”

Looting of shops has taken place in western districts of the city, and seven people were injured in a shooting at a protest in front of city hall last Thursday, an incident police say they played no part in.

Louisville police spokeswoman Jessie Halladay admits there have been shortcomings on her organisation’s behalf: “This is the message they’re sending us, that we don’t trust the police, and we need to work on that.”

Halladay is one of several law enforcement officers in attendance at an energetic protest calling for justice for Breonna Taylor at Jefferson Square Park in downtown Louisville on Thursday night.

The atmosphere is both defiant and carnival-like. In the centre of the square, every few minutes a loudspeaker is handed around to anyone who wants to air their views in public. Around the edges of the park volunteers pick up rubbish and hand out pizza slices, fruit, snacks and napkins. A thunderstorm sends some scattering for cover, but fails to dampen cries of “no justice, no peace”.

A short drive back to west Louisville, there are no such gatherings and little in the way of organised resistance. Here, in what is a predominantly African-American neighbourhood, streets with countless derelict homes and abandoned churches portray the systemic disadvantage and decay that have plagued black communities for generations.

Seventy-five per cent of residents in this district are black, while the unemployment rate for African-Americans is double the city average. Driving through the streets, several routes are blocked by police due to the shooting of a man and child in their car not far from where McAtee was gunned down. More than 85 per cent of the murders that in the city last year took place in west Louisville.

Back at YaYa’s BBQ Shack, the mood is dispirited. “Once two, three weeks go by, this will be another dead issue, too. Everything will be the same,” says McAtee’s nephew Marvin of the nationwide protest movement. “[Change] ain’t happened in the last 10 years, I don’t see anything changing now.”