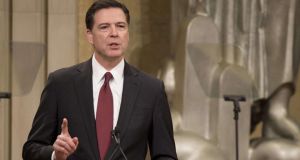 Director of the Federal Bureau of Investigation James Comey: spoke candidly about race relations and the “disconnect” between black communities and US law enforcement. Photograph: Jim Watson/AFP/Getty Images

Federal Bureau of Investigations director James Comey used a speech at an American university to speak candidly about race relations and the “disconnect” between black communities and US law enforcement.

In blunt comments at Georgetown University in Washington on Thursday, Mr Comey said Americans held unconscious racial biases and that police must resist “lazy shortcuts of cynicism” – jumping to conclusions about black men based on past experience.

America was at “a crossroads”, the FBI director said, following a turbulent year of relations between police and African-American communities.

He mentioned last year’s deaths of black men Michael Brown in Ferguson, Missouri and Eric Garner in Staten Island, New York, at the hands of white policemen, which led to widespread protests and a national debate about excessive police force against black men.

He name-checked murdered New York police officers Wenjian Lieu and Rafael Ramos, who were killed by a black man avenging the deaths of Brown and Garner.

Rowing into the debate in comments that drew praise from police, Mr Comey noted that law-enforcement officers were as susceptible to racial bias as anyone else in society. He referred to a song from the satirical Broadway musical Avenue Q called Everyone’s a Little Bit Racist.

Mr Comey defended police, though, saying they were “not the root cause of problems in our hardest-hit neighbourhoods” but that many men in minority families “grow up in environments lacking role models, adequate education and decent employment”.

In cities where a disproportionate amount of street crime is committed by people of colour, officers, he said, after years of police work “can’t help but be influenced by the cynicism they feel”.

“A mental shortcut becomes almost irresistible and maybe even rational by some lights,” he said and urged police to “redouble our efforts to resist bias and prejudice”.

“We must better understand the people we serve and protect by trying to know deep in our gut what it feels like to be a law-abiding young black man walking down the street and encountering law enforcement.”

Drawing on his own heritage as a descendant of Irish emigrants, Mr Comey said American society and law enforcement viewed the Irish a century ago as “drunks, ruffians and criminals”.

“Law enforcement’s biased view of the Irish lives on in the nickname we still use for the vehicles we use to transport groups of prisoners. It is after all ‘the Paddywagon’. The Irish had some tough times but little compares to the experience on our soil of black Americans.”

Mr Comey evoked the life of Patrick Francis Healy, son of an Irish plantation owner and a slave. Healy and his siblings were, by law, considered slaves. He is believed to be the first African-American to earn a PhD and to be president of Georgetown University.

“At many points in American history, law enforcement enforced the status quo, a status quo that was often brutally unfair to disfavoured groups,” he said. “It was unfair to the Healy siblings and to countless others like them.”