President vows to halt all immigration into US as death toll from Covid-19 passes 43,000 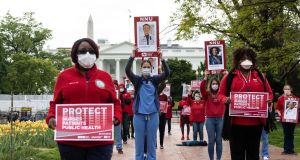 Nurses protest over the lack of personal protection equipment amid the Covid-19 pandemic in front of the White House in Washington, DC, on Tuesday. Photograph: Nicholas Kamm/AFP via Getty Images

US president Donald Trump vowed to halt all immigration into the United States temporarily to help protect American workers during the coronavirus pandemic, as the number of cases in the US continued to rise.

Mr Trump said on Twitter that he would be signing an executive order temporarily suspending all immigration into the US, “in light of the attack from the Invisible Enemy, as well as the need to protect the jobs of our GREAT American Citizens!”

There were few details on Tuesday on how such a ban would work. With new immigration into the US effectively on hold for the past month, as US embassies across the world have scaled back visa issuance and international air travel has ground to a halt, the policy would be unlikely to materially affect immigration in the short term. But any longer-term move to curb legal immigration would likely be resisted by Democrats and could be challenged in court.

Democratic National Committee chairmanTom Perez said the announcement was an attempt by Mr Trump to “move the conversation away from his failures on the coronavirus and help his re-election”, noting that countless immigrants were working across the country to help keep residents safe.

The president, who was due to host New York governor Andrew Cuomo at the White House later on Tuesday, touted his handling of the coronavirus pandemic in a series of tweets.

Noting that the TV ratings for the daily coronavirus briefings are “through the roof”, he said he had enjoyed “great ‘ratings’ my whole life. There’s nothing unusual about that for me.”

He also asserted that he had a 96 per cent approval rating in the Republican Party. “Thank you! This must also mean that, most importantly, we are doing a good (great) job in the handling of the Pandemic,” he tweeted.

His comments come as a new Washington Post-University of Maryland poll showed that most voters in the United States disapprove of Mr Trump’s handling of the coronavirus outbreak. Just over half, 54 per cent, of respondents viewed his handling of the crisis as negative, in comparison with the 72 per cent who approved of the job their state governors were doing.

As the US death toll passed 43,000 on Tuesday, there was some significant pushback from local officials in some states as governors announced plans to reopen the economy.

In Georgia, Republican governor Brian Kemp announced that gyms, bowling alleys, tattoo parlours and other businesses would open on Friday, with theatres and restaurants opening next Monday.

But several mayors of cities across the state questioned the wisdom of lifting social-distancing restrictions at this point. Keisha Lance Bottom, the Democratic mayor of Atlanta, pointed to a rise in cases over the past week and urged residents to ignore the governor’s recommendations.

‘As soon as possible’

Other states also signalled that they could start reopening parts of the economy in the coming days and weeks. Retailers in Colorado will have the option of opening for street pick-ups next Monday, with stores reopening with limitations on customers on May 1st.

Republican governor Bill Lee of Tennessee said restrictions would not be extended when they expired on April 30th, paving the way for a reopening of the vast majority of businesses.

Mr Cuomo suggested different districts of New York could reopen at different stages, as the state continued to see the highest number of cases in the country.

“North Country has a totally different situation than New York City. Central New York has a different situation. We operate as one state but we also have to understand variations, and you do want to get this economy open as soon as possible,” he said.