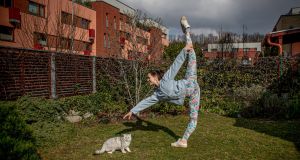 Nikola Marova, first soloist of the Czech National Ballet, practises in the garden of her home in Prague. Photograph: Martin Divisek/EPA

Serbia, Albania and other countries in the Balkans and central Europe have followed the Czech Republic in starting to ease restrictions imposed to fight the coronavirus pandemic.

The Czech government allowed a narrow range of shops to reopen before Easter, and on Monday it launched a five-step plan to unwind further stringent controls imposed after the country declared a state of emergency on March 12th.

Farmers’ markets and car dealerships are among the businesses that can resume trading, and weddings attended by maximum of 10 people can be held and final-year students can return to university in small numbers to prepare for exams.

Restrictions will be relaxed in phases until June 8th, when cinemas, theatres, hotels, restaurants, cafes and bars will reopen fully and cultural, sports and other events involving up to 50 people will be allowed to resume.

Czech officials plan to monitor the spread of the virus with a “smart quarantine” system, which accesses phone and bankcard data to help identify people who have been in close proximity to someone diagnosed with Covid-19. The project has been piloted in several regions and is now being rolled out nationwide.

Czech health minister Adam Vojtech said on Tuesday that starting this week 27,000 people around the country would be tested for Covid-19, to gauge the real extent in the community of a virus that causes mild or no symptoms in many cases.

The results are expected in early May and will help shape the Czech Republic’s future response to the virus, which is known to have infected 6,914 people in the country of 10.6 million people and claimed 196 lives.

Serbian president Aleksandar Vucic viewed a section of the under-construction Belgrade-Budapest rail line on Tuesday, as builders were allowed to return to work as long as social distancing and hygiene guidelines were respected.

Vegetable markets in Serbia re-opened on Tuesday, along with businesses including car repair garages, dry cleaners, bookshops and shoemakers, while restrictions on the movement of over-65s were also eased. Serbia has reported 6,890 cases of Covid-19 and 130 deaths from the virus among its 7 million people.

Certain shops resumed trading and outdoor work restarted in Slovenia on Monday, while neighbouring Croatia’s government plans to discuss easing restrictions on Thursday. Slovakia is scheduled to lift some controls on Wednesday.

Hungary intends to map out its gradual return to normality in early May, while Romanian president Klaus Iohannis has said his country’s strict lockdown could start to be relaxed in stages after a state of emergency decree expires on May 15th, providing the coronavirus outbreak is then under control.

“Now is the time to think about a relaxation plan when the conditions are met,” he said on Tuesday. “There will be no complete relaxation at once...we will have to continue to live with certain restrictions.”

Romania has registered 9,242 cases of Covid-19 and 482 deaths from the virus among its population of about 19 million people.