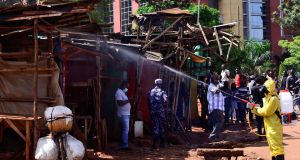 In his small studio in Gulu, northern Uganda, wedding singer Badman Koda scrolls through a list of cancelled gigs on his computer screen.

“This coronavirus has brought our income down. We are really not having money,” he says, dejectedly.

One month before, on March 18th, Uganda’s president Yoweri Museveni had warned the public about the dangers of a “Ugandan-style” wedding. Announcing the closure of schools and a ban on “merry-making” to stop crowds gathering, Museveni labelled weddings a dangerous “pentagon” because of all the people who attend, including family and friends from both sides.

The only weddings that could go ahead, until restrictions were lifted, were “scientific marriages” with a bare minimum of people, the 75-year-old president said. “[My wife] Mama Janet and myself did the scientific wedding back in 1973 and we have never regretted [it].” In northern Uganda, men can marry multiple women, though those who have a church wedding have to renounce all other wives.

Over the past 20 years, weddings have grown in size and complexity, with hundreds or even thousands of attendees. It has also become increasingly common in northern Uganda to get a bespoke wedding song composed. The singer will interview the couple separately, asking how they met, what they love about each other, and what family members they would like named, as well as figuring out any in-jokes that could be included. “This is very, very important,” says Koda.

The singer will then come and perform at the ceremony, accompanied by traditional dancers. It gives guests a chance to learn or be reminded about the couple’s back story, Koda adds.

He is usually paid between 1.65 million and two million Ugandan shillings (€400 and €488) for each wedding, though he’s received as much as six million. The package includes the recorded song, the performance and a video to accompany it.

There’s a lot of competition around the most well-known musicians, says singer Pamela Peace. A couple “will look for this big, big artist because they know [a wedding] they’ve done for somebody. They want theirs to be like that one”.

‘Not going to happen’

Peace focused on traditional marriages and weddings after realising it was difficult to make money from other performances. Musicians in east Africa can find it near impossible to enforce intellectual property laws when it comes to selling their records, meaning music shops distribute their music but never pay them.

“Weddings at least give us something, we earn from it,” Peace says. “So it affected us that most of the weddings which we were supposed to perform at were cancelled.”

She says there was no chance, however, that Museveni’s proposed “scientific weddings” will catch on. “The way he’s talking is like you need only four or five people, which is not going to happen in our culture anyway. It will not work,” she said, laughing. “A wedding is a celebration.”

One of the postponed weddings Peace was supposed to perform at was that of Opio Denis (33) and his partner of 13 years, Amun Stellar Opio. The couple already have five children together, but their Acholi tribe’s culture means they couldn’t officially tie the knot until Denis had finished paying his fiancée’s dowry: seven million Ugandan shillings (€1,700), 10 goats and seven cows.

They were expecting 700 people to come and honour them on May 1st. They paid five million Ugandan shillings (€1,200) for food and drink alone – a fortune in a country where the average monthly income is €100.

“We postponed because we wanted to wait for when the president says people are free to do what they want,” Denis said, describing the “big party” he imagines. “If you’re Acholi you’re proud when you get married. I want people to come and enjoy. We don’t mind about the money, the most important thing is the happiness.”