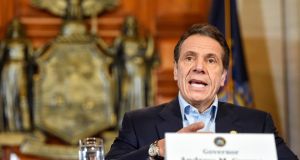 New York governor Andrew Cuomo warned that New York was “in crisis” after the death toll in the state from coronavirus passed 3,000, more than doubling in three days.

“The curve continues to go up,” Mr Cuomo said at a news conference in Albany on Friday, as he pleaded for help from the federal government. “New York is in crisis. New York needs help.”

More than 100,000 people have tested positive for Covid-19 in the state, with more than half of these in New York city.

“I’m not going to let people die because we didn’t redistribute ventilators,” he said, a day after warning that the state’s stock of ventilators would be depleted in six days.

New York mayor Bill De Blasio predicted that the city could run out of ventilators by Sunday. He also warned of a shortage of medical staff.

“Unless there is a national effort to enlist doctors, nurses, hospital workers of all kinds and get them where they are needed most in the country in time, I don’t see, honestly, how we’re going to have the professionals we need to get through this crisis,” he said on Friday.

With New York expecting a surge in coronavirus cases in the coming days, the Javits Center in Manhattan, which had been transformed into a makeshift hospital for non-covid patients, began accepting patients with symptoms on Friday.

Yet the logistical challenges facing the city were laid bare by the revelation that the US navy’s Comfort, a 1,000-bed hospital ship that docked in New York on Monday and was mandated to admit non-coronavirus patients, had only 20 patients on board.

As New York continued to see the highest number of cases and deaths from coronavirus in the US, others areas of the country remained under strain.

Cities including Detroit and New Orleans have reported rising coronavirus cases. Florida was also braced for further infections, and at least 100 people have died in the state. Governor Ron DeSantis issued a stay-at-home order this week that came into effect on Friday, although churches have been exempt from the measure.

The MS Zaandam, a cruise ship that left Argentina on March 7th carrying Irish and other citizens, docked in Florida on Thursday evening. A second ship, the Rotterdam, which had taken on board passengers that were not showing signs of coronavirus, was also permitted to dock at Port Everglades.

The 10 Irish passengers on board were expected to fly back to Europe, most likely to London, on chartered flights on Saturday. Irish officials in Washington and Atlanta have been in close contact with the passengers and other European countries, including Britain, about repatriating the citizens.

Four people have died on the Dutch-registered ship, which had been scheduled to end its cruise in Chile on March 21st, but was denied permission to dock.

As the death toll across the US continued to rise – more than 6,000 people have died from the virus – new economic data released on Friday showed the dire economic impact of the pandemic.

Figures from the labour department showed that the US economy shed 700,000 jobs in March – an indication of the impact of the virus in the early part of the month. The data used related to the period finishing March 12th, before the full effect of the coronavirus shutdown was felt.

The figures show that the majority of lost jobs were in the hotel and restaurant sector.

A more up-to-date insight into the state of the jobs market emerged on Thursday when it emerged that 6.6 million people filed for unemployment benefits last week, in addition to 3.3 million the previous week.

Treasury secretary Steve Mnuchin said that some Americans would start receiving direct money from the government within the next two weeks.

The $2.2 trillion rescue package agreed by Congress more than a week ago includes provisions to pay Americans earning up to a certain level up to $1,200 in direct payments per adult as well as $500 per child.

Americans who have given bank account information to the Inland Revenue Services (IRS) will receive their money first, with cheques sent by post to others throughout the summer.