Covid-19: ‘New’ coronavirus variant may have been in United States since October 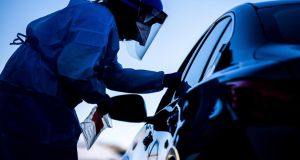 A Covid test is administered at Echo Park Stadium in Parker, Colorado. The testing site is one of the closest to where the first case of an apparently more contagious Covid variant was detected in the United States. Photograph: Michael Ciaglo/Getty Images

A coronavirus variant carrying some of the same mutations as the highly contagious British variant may have been in the United States since October and already be widespread, a reanalysis of more than two million tests suggests.

Genome sequencing to confirm whether the variant observed in Americans is the same as the so-called B117 variant currently circulating in the UK is under way.

Results are expected within days, but the revelations have prompted fresh questions about where the altered virus originated, including a small possibility that it began in the United States not the UK, or elsewhere altogether. The variant has also been found in at least 17 countries, including South Korea, Spain, Australia and Canada.

“It wouldn’t be at all surprising if at least some of the cases were B117,” said Eric Topol, head of Scripps Research Translational Institute in La Jolla, California, who was not involved in the research, but whose team confirmed a Californian case of the B117 variant on Wednesday.

“It has probably been here for a while at low levels – but you don’t see it until you look for it.”

The existence of a new and highly transmissible Sars CoV-2 variant was announced by the UK’s health secretary on December 14th after Covid-testing laboratories reported that a growing number of their positive samples were missing a signal from one of the three genes their PCR tests use to confirm the presence of the virus.

Further sequencing revealed that such “S gene dropout” was the result of mutations in the gene encoding the spike protein which the virus uses to gain entry to human cells. The variant is thought to have been circulating in the UK since September.

News of the new variant has led to multiple countries restricting travel from the UK – or in the case of the US, requiring travelers to show proof of a negative Covid-19 test to be allowed into the country.

However, it has been detected this week in Colorado and California, and the suspicion is it may already be widespread.

To investigate, scientists at the California-based DNA testing company Helix examined the prevalence of S gene dropout among two million of the Covid tests the company has processed in recent months. They observed an increase in S gene dropout among positive samples since early October, when 0.25 per cent of positive tests exhibited this pattern.

This has since grown, hitting 0.5 per cent on average last week – although in Massachusetts, which has the highest number of such samples, it currently stands at 1.85 per cent, although no cases of the B117 variant have been announced in that state yet.

Further analysis revealed mutations in some of the same regions of the S gene which are also present in the B117 variant – although full sequencing of the viral genome is needed to confirm whether this is indeed the same variant, or something else.

The coronavirus pandemic is out of control in the US, with the death toll in 24 hours of more than 3,740 earlier this week signifying the worst day of the outbreak in the nation yet.

Public health experts and Joe Biden, the Democratic president-elect, have warned that the situation will get worse before it gets better, even as vaccines come on stream. – Guardian