Traffic between Calais and Dover down significantly in recent days 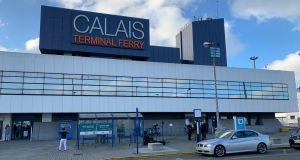 French customs officials say there is unlikely to be a repeat of the chaos experienced by truck drivers in parts of northern France and the UK in recent weeks, after the Brexit transition period ends at 11pm Irish time on Thursday.

Thibaut Rougelot, head of regional communications with the French customs service, said traffic between Calais and Dover had decreased significantly, but might begin to return to normal levels early next week.

Speaking on Thursday during a tour of the new facilities set up at the Calais terminal ferry, Mr Rougelot said the infrastructure now in place should help to keep freight moving smoothly. He said that an additional 700 customs officers had been taken on in anticipation of Brexit.

From Friday, new systems will be in operation at Calais that require truck drivers to have a barcode confirming that their online customs forms have been completed. The infrastructure cost the port authority €13 million to install.

Mr Rougelot conceded that there may be some teething problems as companies and drivers get used to the new post-Brexit trade rules.

“If the drivers are delayed here at Calais because they don’t have their online customs declarations filled in correctly, they will know what to do the next time they travel through the port. There may be some difficulties initially.”

The port has set up two lanes for incoming traffic. Drivers directed to the green route can travel onwards out of Calais, but those who have not completed their customs declarations are sent to the orange lane and into an on-site car park for further checks.

Customs officials expect that there will not be much disruption to traffic over the coming weeks. “Many companies started stockpiling goods at the start of December in order to avoid being caught up in potential delays at the ports of Dover and Calais”, added Mr Rougelot.

He said that overall this year traffic on the route had decreased, from two million trucks crossing the Channel by ferry last year, to 1.7 million in 2020. The customs official said this was due to a combination of factors, including the current health crisis and Brexit.

Mr Rougelot said that it would be interesting to see how the new ferry routes being launched between Rosslare and Dunkirk would operate.

He said that the voyage would take almost 24 hours, making it longer than travelling through the UK and into Europe through Calais (17 hours). He said it would also be more expensive.