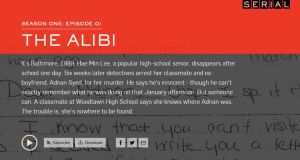 A Maryland man, whose 2000 murder conviction was thrown back into spotlight by the popular Serial podcast, was back in court on Wednesday to argue that he deserved a new trial because his lawyers had done a poor job with his case.

Adnan Syed (35) who is serving a life term in prison after being convicted of murdering his 18-year-old ex-girlfriend Hae Min Lee in 1999, appeared in a courtroom packed with family members, supporters and the producer of the podcast.

The killing was the subject of the podcast in October 2014. The podcast, released by public radio station WBEZ in Chicago, has been downloaded more than 68 million times, CBS reported last year.

On the first day of a hearing expected to run through Friday, defence attorney C Justin Brown asked Baltimore City Circuit Court Judge Martin Welch for a “new and fair” trial for Syed, who he said had “ineffective assistance by trial counsel” prior to his conviction.

Mr Brown contended that Syed’s former lawyer Cristina Gutierrez, who died in 2004, failed to contact a potential witness Asia McClain, who said she saw Syed at the library the day of the murder.

Ms McClain is in Baltimore and could be called to testify, Mr Brown said.

Mr Welch in November ordered a hearing to look into questions raised by Mr Brown over cellphone tower records that prosecutors used to show that Syed was at the site in a park where Ms Lee was buried.

Syed’s lawyers have said in court papers that phone company AT&T had indicated when it provided the data that incoming calls could not be used to determine location, but prosecutors used records on incoming calls to convict him.

“He strangled with his own hands an 18-year-old girl,” he said, adding that the evidence was overwhelming and Syed was “convicted because he did it and the state proved it”.

In May, a ruling from the Maryland Court of Special Appeals opened the door for Syed to call Ms McClain as a witness. The court returned the case to Baltimore City Circuit Court to reopen post-conviction proceedings.