Opinion: We are becoming more cynical but still have a need for visionary, inspiring figures 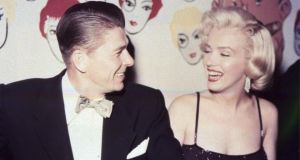 The Christian Science Monitor asked somewhat bemusedly in a recent article, “Why is John F Kennedy still so popular?”

In Ireland, at least until recently, that would have been a very stupid question. He was the first American president with whom we could really identify, he came to visit us and made us feel good about ourselves, and he was gorgeous.

What else could you want? Much better than sweaty Tricky Dicky Nixon, even when he tried to play the Irish card by coming to visit a hastily renovated Quaker burial ground in Timahoe, Co Kildare.

Yet it seems rather quaint now to be bursting with pride because John F Kennedy was the first Catholic president of the United States, doesn’t it? After all, many presidents have claimed Irish ancestry, including Bill Clinton, although in that case it appears to be more a matter of amiable wishful thinking than fact.

So many politicians have attempted to emulate Kennedy. Remember the famous put-down of Dan Quayle by Lloyd Bentsen? Quayle was attempting to deflect criticism of the fact that he had little political experience by saying he had as much congressional experience as Kennedy. Bentsen delivered his classic putdown, parodied ever since: “Senator, I served with Jack Kennedy. I knew Jack Kennedy. Jack Kennedy was a friend of mine. Senator, you’re no Jack Kennedy.”

I have my own pet theory as to why Kennedy was so popular, and it has to do with another president who claimed Irish ancestry: Grover Cleveland.

Cleveland assumed office in 1893, during dire economic circumstances. He has one unusual claim to fame. He disappeared for about four days, and secretly had part of his jaw removed. He had to have a second operation , so was out of the public eye for about a month. It was a slow-growing cancer but he judged that news would cause Wall Street to panic. So he went on “vacation” on a boat, and a team of surgeons removed the tumour.

Imagine being able to conceal that you had part of your jaw removed. He blamed teeth extractions for his swollen face, and a bout of rheumatism for sick leave. Cleveland and Kennedy had the advantage of living before the internet. If Barack Obama went missing for four minutes Twitter would spontaneously combust.

Kennedy had a few secrets of his own, including medical ones, such as his chronically bad back and, more importantly, Addison’s disease. It would be impossible to keep such a secret today, much less conceal his blatant womanising.

Michelle Obama’s style choices are closer to those of Jacqueline Kennedy than to those of any other presidential spouse since. We trust she is not subjected to her husband bedding interns and bullying them into performing sex acts on his friends, as was claimed last year by former Kennedy intern Mimi Alford.

Hero or bungler
The Christian Science Monitor muses about what Kennedy did that was noteworthy. Depending on your biases he was either a hero who averted the Cuban missile crisis or a bungler who caused it by approving the Bay of Pigs invasion.

In fairness to him, his time in the Oval Office was very short: the legendary 1,000 days. His one real contribution may have been to convey a sense that men and women of his generation could really make a difference, could really change the world. Would that sense of hope and vitality have been irreparably damaged, however, if his affairs, or even illnesses, were constantly being reported?

The age of information has made us cynical. No one can sustain a golden glow when every word and move is parsed and replayed endlessly. In the case of John F Kennedy it might have been better if the public had known of his flaws.

However, the constant flood of information, trivial and significant, has also paralysed us. It seems impossible to have heroes any more, because the media, particularly online media, will relentlessly magnify any mistakes, big or small.

Yet we never needed iconic figures more. Who has been a greater disappointment than Obama, the man who seemed to channel the same golden aura as Kennedy but instead turned out to be someone who would efficiently oversee and personally approve drone strikes?

So many issues, from youth unemployment to climate change, need visionary figures who can motivate us to abandon our hip, ironic detachment in order to actually do something.

In our age of constant surveillance the only ones who can succeed in doing so are those whose lives and actions succeed in living up the values they advocate.