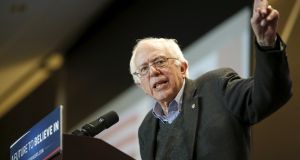 US Democratic presidential candidate Bernie Sanders in Iowa: “A candidate who was originally thought to be the anointed candidate, to be the inevitable candidate, is now locked in a very difficult race here in Iowa and New Hampshire.” Photograph: Scott Morgan/Reuters

Losing ground in the polls in the first nominating state of Iowa, Democratic presidential frontrunner Hillary Clinton has gone on the attack against her closest rival, Vermont senator Bernie Sanders.

At a campaign stop in northeast Iowa, Ms Clinton challenged Mr Sanders on his health care plan, adding another line of attack on the self-professed democratic socialist beyond gun safety.

“I don’t believe, number one, we should be starting over. We had enough of a fight to get to the Affordable Care Act. So I don’t want to rip it up and start over,” she told supporters in Waterloo, Iowa.

Until this week, she had, with an eye on the general election in November, been concentrating her attacks on Republicans.

Ms Clinton’s new strategy refocuses attention on Mr Sanders as she tries to win Iowa, a state she came third in during her first presidential campaign in 2008, a loss to Mr Obama she never recovered from.

An NBC News/Wall Street Journal/Marist poll on Sunday put the former senator and secretary of state at 48 per cent, just three points ahead of Mr Sanders among likely Democratic voters in Iowa’s caucuses on February 1st.

Ms Clinton has argued that she is the only candidate running for the Democratic nomination who can beat the Republican in November.

“A candidate who was originally thought to be the anointed candidate, to be the inevitable candidate, is now locked in a very difficult race here in Iowa and New Hampshire,” said Mr Sanders on Monday.

“Obviously in that scenario, what people do is start attacking.”