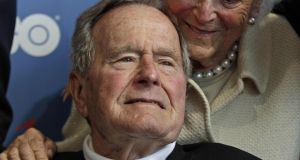 Former United States president George H W Bush takes some unexpected swipes at Dick Cheney and Donald Rumsfeld, key members of his son’s administration, over their reaction to the September 11th attacks, in a new biography of the 41st president.

In Destiny and Power: The American Odyssey Of George Herbert Walker Bush, author Jon Meacham quotes Mr Bush as saying that Mr Cheney and Mr Rumsfeld were too hawkish and that their harsh stance damaged the reputation of the US, the cable news network Fox reported.

Speaking of Mr Cheney, who was vice president under George W Bush, the senior Bush said: “I don’t know, he just became very hard-line and very different from the Dick Cheney I knew and worked with,” according to the report.

“The reaction (to September 11th), what to do about the Middle East. Just iron-ass. His seeming knuckling under to the real hard-charging guys who want to fight about everything, use force to get our way in the Middle East,” Mr Bush told Meacham in the book to be published next Tuesday.

Podcast: the race for the Republican nomination

Mr Bush believes Mr Cheney acted too independently of his son by creating a national security team in his own office, and may have been influenced to become more conservative by his wife and daughter, Lynne and Liz Cheney, the report cites the biography as saying.

On Mr Rumsfeld, secretary of defense for most of the two terms served by his son, Mr Bush is even more critical. He is quoted as saying: “I don’t like what he did, and I think it hurt the president,” referring to his son.

“I’ve never been that close to him anyway. There’s a lack of humility, a lack of seeing what the other guy thinks. He’s more kick ass and take names, take numbers. I think he paid a price for that. Rumsfeld was an arrogant fellow,” he was quoted as saying in the biography.

Fox News quoted Mr Cheney as denying his family had influenced his views, saying: “It’s his view, perhaps, of what happened, but my family was not conspiring to somehow turn me into a tougher, more hardnosed individual. I got there all by myself.”

Mr Bush’s spokesman could not immediately be reached for comment.