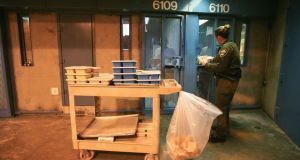 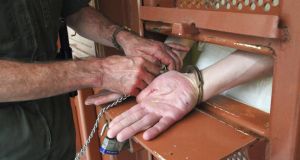 Solitary confinement: a prisoner at the Pelican Bay State Prison near Crescent City in California has his hands shackled before his cell door is opened. Photograph: Jim Wilson/The New York Times 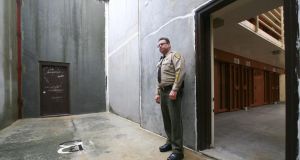 Of the 10.1 million people held in penal institutions across the world, 2.29 million are held in the US. Of those, 80 per cent are poor, more than 60 per cent are members of racial minorities and more than 50 per cent have mental-health problems.

Across the US almost seven million people are in prison, on probation, on parole or in county jails. The numbers represent a 379 per cent increase from 1980, when the number was not quite two million.

Children are not immune from imprisonment. There are 250,000 children in adult jails and prisons across the US, some as young as eight and nine, of whom 3,000 have been sentenced to life without parole. Of these, 74 per cent are African-American or Latino.

In prison they are 10 times more likely to be sexually and physically abused than are adult prisoners. Many of these adults and young people did not have proper legal representation at the time of their trials despite the 1963 US supreme court ruling in the Gideon v Wainwright case that entitles all defendants to legal counsel irrespective of income.

Even in the US California stands out. Recent decades have seen rapid growth in the state’s prison population – greater than the combined numbers of France, Germany, Belgium, the Netherlands, Denmark, Sweden and Norway – although the state’s overall population is just a fifth of those countries’.

The current controversy relates not to the number of prisoners in California but to the conditions in which they are held. Despite a flurry of prison construction in the 1980s that increased the number of penal institutions from 12 to 33, in 2006 its prison population of 172,000 was 200 per cent above design capacity.

And although the supreme court has ordered the state to bring its prisoner population into line with capacity, the state has failed to do so.

The supreme court is not alone is its dissatisfaction with how prisoners are being treated; the prisoners don’t like it either. There were two hunger strikes in 2011: the first involved 6,600 prisoners; the second 11,898 prisoners. Now prisoners are set for a repeat strike, with July 8th as the target date.

Pelican Bay State Prison, a supermax, or super-maximum-security jail, holds 1,111 prisoners in isolation. There, in an area designed to minimise human contact and reduce visual stimulation, the windowless units in which the prisoners spend 23 hours a day measure 11ft by 7ft. They are fed through a hatch. For an hour a day they can exercise alone in what is referred to as a “dog run” – an open-air cell measuring 16ft by 25ft.

The prisoners also object to group punishments; prison authorities’ reliance on and rewarding of snitches, otherwise known as “debriefing policy”; profiling prisoners based on their tattoos, reading material and associations; the imposition of penalties based on presumption of gang membership; and improved diet and healthcare.

As the July deadline approaches, Martha Wallner, who works in legal services for prisoners with children, believes that this time there will be no turning back, that those who go on hunger strike will not be so easily mollified as they were the last time, when the strikes ended with negotiation between prisoners and the governor, Jerry Brown. Equally, Wallner believes that the governor is not for turning.

“Ultimately,” says Wallner, “this is not just about prisoners and their families. This is about poor people of colour. And there is no political capital to be gained for meeting their needs, and none will be spent.”