Buzz Aldrin challenges US to lead mission to Mars 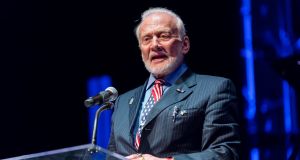 Buzz Aldrin at the John F Kennedy Centre for the Performing Arts in Washington: “Ever since those first steps on the moon, I have worked to ensure that those steps were not in vain. I have continued pushing to maintain American leadership in human space flight.” Photograph: Scott Suchman

Buzz Aldrin gave a chuckle when I asked if he caught a glimpse of Ireland from space on that famous trip to the moon in 1969.

“You guys are too far north,” the former US astronaut told me at a reception after an evening of music and speeches at the John F Kennedy Centre for the Performing Arts in Washington last Sunday.

The event was to honour the 99th anniversary of the former president’s birth, kicking off a year of events up to the centennial on May 29th, 2017.

Aldrin disguises his 86 years when you get him talking about an ambition that has become his life’s second most important mission after the Apollo 11 trip, when he became mankind’s second moonwalker: a mission to Mars.

The former US air force fighter pilot becomes energised telling me about how soon settlements on the solar system’s red planet could happen with engineering know-how, gesticulating to emphasise his point.

Within seconds he delves into the technical nitty gritty of landing on Mars. You can see why Aldrin, the first astronaut with a doctorate (in astronautical engineering, from MIT), was known as “Dr Rendezvous” because of his passion for the detail behind docking in space.

It was helped in no small part by reminding the audience at John F Kennedy: Celebrating the Past to Awaken the Future, last Sunday’s event, of the 35th US president’s inspirational drive behind the space programme.

“I believe that this nation should commit itself to achieving that goal, before this decade is out, of landing a man on the moon and returning him safely to the Earth,” Aldrin said, quoting Kennedy’s words in an address to the US Congress in May 1961 on the subject of “Urgent National Needs”.

A line more fitting of Kennedy’s relentless ambition, mentioned on Sunday, was his quoting of George Bernard Shaw on his visit to the Oireachtas during his 1963 Irish trip when he said: “Other people . . . see things and . . . say: ‘Why?’ . . . But I dream things that never were and I say, ‘Why not?’ ”

Aldrin noted Kennedy first challenged his space team to find a way to go to Mars, but Nasa said the only realistic objective was to put a man on the moon. Recalling Kennedy’s words – “it is time to take longer strides” – Aldrin said it was time for the US to take those next giant leaps.

“Ever since those first steps on the moon, I have worked to ensure that those steps were not in vain. I have continued pushing to maintain American leadership in human space flight,” he told the audience.

“Yet if we are honest about it we have fallen into a malaise about the future space flight. This saddens and, yes, sometimes angers me.”

Aldrin’s blueprint, however lofty, would undoubtedly make America great again. The uplifting words of an octogenarian are in sharp contrast to the argy bargy this week between the presumptive Republican presidential nominee Donald Trump and his likely Democratic rival in this year’s presidential election, Hillary Clinton.

Aldrin explained a mission to Mars was “not just a technical challenge – it is a political challenge”. His plan involves the US working with China, something that would likely be unthinkable under a President Trump, given how the billionaire’s proposed isolationist foreign policy and protectionist economic plans would likely start a trade war with China.

Irish ambassador to the US Anne Anderson in her address at the Kennedy event, coming during the three-week “Ireland 100” arts and literary festival at the centre, touched on the importance of nations working together without mentioning the isolationist rhetoric of the presidential campaign.

“Now more than ever, we need president Kennedy’s vision for the world and for America – a world that values multilateralism and understands the strength of soft power,” she said.

Aldrin said that a US president “who appeals to our higher aspirations” and takes us towards Mars would not only make history but “he or she will long be remembered as a pioneer of mankind”.