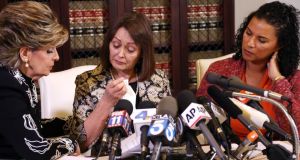 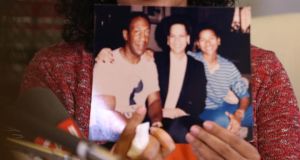 Two women accused Bill Cosby on Thursday of drugging them decades ago when they met him as young models, and one said he sexually assaulted her.

More than a dozen women have publicly accused Cosby of sexual misconduct in recent months, in a controversy that has tarnished the image of the actor and comedian best known as the lovable father figure on the 1980s sitcom The Cosby Show.

Cosby denies the allegations of sexual assault, many of which are decades old and fall outside the statute of limitations for criminal or civil cases.

Linda Brown and Lise-Lotte Lublin came forward on Thursday as the latest women to bring public accusations against Cosby at the Los Angeles office of attorney Gloria Allred, who acknowledged it was too late for them to sue Cosby.

Ms Brown told reporters she met Cosby in 1969 in Canada and went to his hotel suite where he gave her a soft drink that caused her to black out. She said that when she woke up, she was naked next to him in bed.

“I couldn’t move or speak. I felt paralysed, he flipped me over and sexually assaulted me,” Ms Brown said. “I felt like a rag doll and like a real-life blow-up doll for him.”

Ms Lublin said she met Cosby in 1989 at a hotel in Las Vegas and that he asked her to perform an improvisation on the pretext of evaluating her acting. The comedian gave her two alcoholic drinks that caused her to feel disoriented, she said.

Ms Lublin said that a short time later, he embraced her. She said her memory of the incident was hazy and that she remembered waking up at her home in the area and not knowing how she got there.

Ms Allred said Ms Brown and Ms Lublin believed Cosby drugged them, which other women in media interviews have also said happened to them in encounters with the comedian.

Cosby’s lawyer has called those and similar claims “discredited” and “defamatory.” His attorney did not immediately return emails on Thursday.

Cosby (77), had a show scheduled for Thursday in Bakersfield, California, but in a statement earlier this week, he postponed it.

His February 21st show at Heinz Hall in Pittsburgh was also cancelled by what venue officials described as the result of a mutual agreement with Cosby.