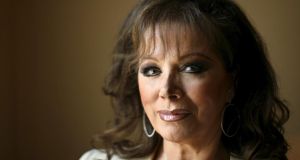 Jackie Collins was known for her vibrant novels about the extravagance and glamour of life in Hollywood. Photograph: Lucas Jackson/Reuters

Jackie Collins, the best-selling British-born author known for her vibrant novels about the extravagance and glamour of life in Hollywood, died on Saturday in Los Angeles. She was 77.

The cause was breast cancer, her family said in a statement. “It is with tremendous sadness that we announce the death of our beautiful, dynamic and one of a kind mother, Jackie Collins, who died of breast cancer today,” the Collins family said. “She was a true inspiration, a trail blazer for women in fiction and a creative force. She will live on through her characters but we already miss her beyond words.”

Long before the emergence of the Fifty Shades of Grey franchise, Collins dominated the publishing industry’s more lascivious corners. She wrote more than 30 books, many of them filled with explicit, unrestrained sexuality, and sold more than 500 million copies worldwide.

Her first novel, The World Is Full of Married Men, was published in 1968. Australia and South Africa banned it because of its frank depiction of extramarital sex. Other earlier works included The Stud, in 1969, and Rock Star, in 1988.

Collins, the younger sister of actress Joan Collins, wrote her books in longhand on either white printer paper or yellow legal pads, regularly churning out prodigious numbers of pages.

Writing in The New York Times in 1993, Barry Gewen said of Collins’ American Star: A Love Story that it might more appropriately be titled Coming Up for Air.

In 2006, reviewing her Lovers & Players in The Times, critic Janet Maslin described Collins’ writing as “crypto-celebrity gamesmanship” in which the author “maneuvers her characters through a story as if she were playing by a strict set of rules.”

Many of Collins’ novels became fodder for movies and television miniseries. In 2001, for instance, she published Hollywood Wives: The New Generation, which followed Hollywood Wives, Hollywood Husbands, Hollywood Kids and Hollywood Divorces. It became a New York Times best-seller and, in 2003, was made into a TV movie starring Farrah Fawcett, Robin Givens, Jack Scalia and Melissa Gilbert.

She was found to have stage 4 breast cancer in 2007, according to People magazine’s website, and had written five books since then. Her latest 600-plus page novel, The Santangelos, was published in June. In an interview that year with The New York Times Magazine that coincided with the publication of her 25th book, Drop Dead Beautiful, Collins said she did not care what reviewers would say about it. “I never pretended to be a literary writer,” she said. “I’m a school dropout.”

She said in the interview that she did not feel that the increasingly explicit nature of pop culture made her fiction seem quaint.

“Fifteen-year-old girls still read my novels under the bedcovers with a flashlight,” she said.

“But it’s true that I published my first novel in 1968, when no one was writing about sex except Philip Roth. ”

Jacqueline Jill “Jackie” Collins was born Oct. 4, 1937, in London. Survivors include her three daughters, Tracy, Tiffany and Rory, and her sister, Joan.

Collins’ first husband, Oscar Lerman, died of cancer in 1992 after the couple had been married for 27 years.

Four years later, her fiancé, Frank Calcagnini, died of brain cancer. In addition to her romance novels, Collins wrote a cookbook connected to a popular character at the center of several of her best-sellers, The Lucky Santangelo Cookbook, which was published last year and borrows the name from a series she wrote that focused on the former Italian-American gangster family. Those titles included Vendetta: Luck’s Revenge (1996), Dangerous Kiss, Goddess of Vengeance (2011) and Confessions of a Wild Child (2013).