Berkeley deaths: Six Irish students who died when balcony collapsed have been named

Simon Carswell reports from the scene of a balcony collapse in Berkeley, California where six Irish students were killed. Video: Reuters

Minister Charlie Flanagan confirms that five Irish students have died and up to nine have been injured after a balcony collapsed during a 21st birthday party in Berkeley, California early Tuesday morning. 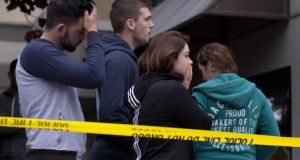 Friends of the victims stand outside as they survey the scene in Berkeley. Photograph: EPA/Peter Dasilva 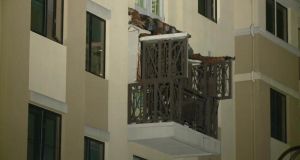 A screengrab showing the scene in Berkeley, Califronia, after a balcony collapsed killing up to five Irish students. Photograph: CBS News 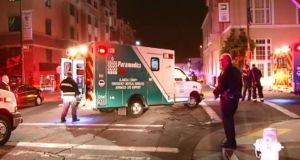 The scene in Berkeley, California, after a balcony collapsed killing five people. Photograph: CBS This Morning 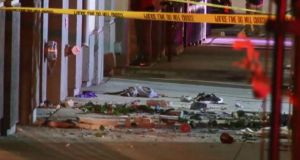 Screengrabs from ABC News of the scene of the collapsed balcony in Berkeley, California. Photograph: ABC News 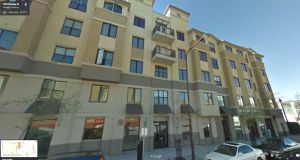 A Google Street image of the building in Berkeley where a balcony collapsed resulting in the death of five Irish students. 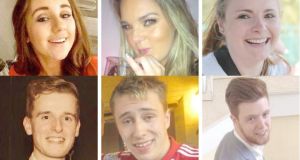 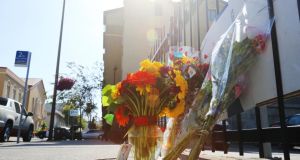 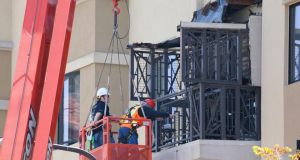 Inspectors in a crane bucket get a closer look at a damaged balcony that collapsed at Library Gardens Apartments in downtown Berkeley where six Irish students were killed. Photograph: Jim Wilson/The New York Times

Six Irish students have been killed in Berkeley, California, when a fourth-floor balcony collapsed.

Niccolai Schuster (21), Eoghan Culligan (21), Eimear Walsh (21), Olivia Burke (21), Ashley Donohoe (22) and Lorcán Miller (21) were celebrating a 21st birthday when the balcony collapsed on to the balcony below.

Ashley Donohoe is an Irish-American from Rohnert Park, which is 50 miles north of San Francisco. She and Olivia Burke are cousins.

The victims, who had travelled to the United States on J-1 summer visas, fell from the fourth floor of an apartment building when the balcony gave way at 12.40am on Tuesday.

Four died at the scene and two others were pronounced dead at a local hospital, police said.

Pictures from the scene showed the balcony detached itself from the wall and collapsed into a balcony on the third floor of the pale stucco building on Kittredge Street, near the University of California Berkeley.

The City of Berkeley has released, along with the update on the incident, the 57-page building and safety inspection history for 2020 Kittredge Street.

The collapsed balcony and the three other similar balconies in the building, have been red-tagged, prohibiting access to those areas.

The City said it had ordered the property owner to immediately remove the collapsed balcony and to perform a structural assessment of the remaining balconies within 48 hours.

Blackrock, the investment giant that advises the property fund that owns the building, and Greystar, the Texas-based company that manages it, said that an independent structural engineer would carry out an investigation to determine the cause of the accident.

Irish students who had been sleeping in the building at the time described hearing a bang. “I walked out and I saw rubble on the street and a bunch of Irish students crying,” said Mark Neville, a J-1 student.

Taoiseach Enda Kenny said the news from California was “truly terrible” and that his thoughts were with the victims’ families. “My heart breaks for the parents who lost children this morning and I can only imagine the fear in the hearts of other parents,” he said.

Mr Kenny will update the Dáil in the morning, and it is understood arrangements for the business of the House may be reviewed.

A number of TDs have called for the tragedy to be marked in some way.

A book of condolences will be open in the Mansion House in Dublin on Thursday and Friday from 10am-4pm.

The dead and injured were brought to three hospitals - Highland Hospital in nearby Oakland; Eden Medical Centre in Castro Valley, about 18 miles from the scene of the accident; and John Muir Medical Centre in Walnut Creek.

Gene St Onge, an Oakland civil and structural engineer who reviewed a picture of the detached balcony at the request of the San Francisco Chronicle, said it appeared to be “a classic case of there being inadequate waterproofing at the point where the deck meets the house.”

While stressing that his assessment was preliminary, he said: “If the waterproofing is substandard, rainwater can enter the building, causing dry rot, which can destroy the wood members within a short time, i.e. only a few years from construction.”

Carrie Olson, a preservation expert who was a member of the City of Berkeley Design Review Committee for 14 years, told The Irish Times the balconies were not constructed to hold large numbers of people.

President Michael D Higgins sent a message of condolence while on a state visit to Italy. “I have heard with the greatest sadness of the terrible loss of life of young Irish people and the critical injury of others in Berkeley, California, today,” he said.

Minister for Foreign Affairs Charlie Flanagan said it was “an appalling loss of life for young people whose hopes and dreams of the future have suddenly and without notice been shattered.”

The US Ambassador to Ireland, Kevin O’Malley, expressed sympathy to the families, loved ones and friends of those who died.

Some of the students attended University College Dublin. The college has made counselling and student support services available to students in San Francisco and in Dublin. An online book of condolences will be opened on the website ucd.ie

Philip Grant, the Consul General of Ireland, held a wreath-laying ceremony at 5pm local-time near the site of the balcony collapse.