Berkeley deaths: ‘I saw rubble on the street and Irish students crying’

Simon Carswell reports from the scene of a balcony collapse in Berkeley, California where six Irish students were killed. Video: Reuters 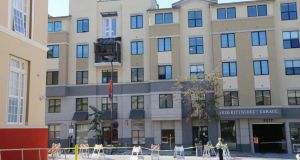 The scene of a balcony collapse at Library Gardens Apartments in downtown Berkeley, California where at least six Irish students were killed. Photograph: AP

One Irish man reported hearing screams at about 12.41 am local time yesterday, the moment that the balcony collapsed from the fourth floor of a building on Kittredge Street in downtown Berkeley.

During the academic year Berkeley, just across the bay from San Francisco, is home to many students who attend University of California, Berkeley, a short walk from Kittredge Street.

In the summer, it is popular as a temporary home to Irish students who are living in the US and working on J-1 visas.

An estimated 2,500 are in California this summer. The Bay Area is particularly popular among students from Dublin.

Pictures showed the fourth-floor balcony appeared to have broken from the building – constructed in 2006 – and partly landed on the third-floor balcony below as well as in the street.

When the balcony collapsed people on it plunged about 40ft (12.2m) to the ground.

The balcony itself is estimated to have measured 5ft by 10ft.

At least seven more were treated in hospital with serious injuries.

Police are still investigating the cause of the collapse.

Among the dead were two female cousins, one of whom was a dual Irish-American citizen whose birthday they were celebrating.

Most of the dead and injured were aged 21, the typical age of Irish students who venture Stateside under the J-1 programme.

Four were declared dead at the scene and two more in hospital afterwards.

The injured were treated at three hospitals in the area: Highland Hospital, about six miles away in neighbouring Oakland; Eden Medical Center in Castro Valley, about 18 miles from the scene of the tragedy; and John Muir Medical Center, about 25 miles east in Walnut Creek.

The Irish Consulate in San Francisco was arranging grief counselling and was trying to quell rumours circulating on social media of further fatalities.

“What the first responders said is, it was quite disturbing,” Byron White of Berkeley Police Department told a local reporter.

“Any time you have a tragedy like this, it’s quite awful.”

Building inspectors have barred people from using the remaining balconies in the complex.

Two Irish students who had been sleeping in the building at the time said that they heard a bang.

“I walked out and I saw rubble on the street and a bunch of Irish students crying,” said Mark Neville, a J-1 student.

“I just heard a bang and a lot of shouting,” Dan Sullivan told a local news reporter.