Drummer writes to judge: ‘Rape on campus isn’t always because people are rapists’

Brock Turner's six month jail sentence for sexually assaulting an unconscious and intoxicated woman is still stirring outrage. Witness Carl-Fredrik Arndt says he was riding his bike when when he saw Turner on top of the victim, behind a dumpster. 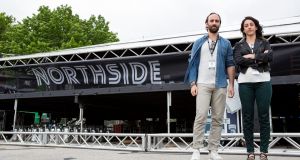 Good English is a small-time band from Oakwood, Ohio, three sisters with a garage rock vibe. In New York City, this week, they became pariahs.

The women have found themselves at the centre of a debate about sexual assault after a pre-sentencing letter written to a judge a few months ago by one of the sisters, Leslie Rasmussen, involving the case of a Stanford University student who was convicted of sexually assaulting an intoxicated woman, was made public. Ms Rasmussen, in her letter, described the student, Brock Allen Turner, as a childhood friend and an elementary school classmate, and defended his behaviour.

In rapid succession, Good English has been dropped from several Brooklyn venues where they were scheduled to play, as well as the Northside Festival, a week-long music festival that began on Monday. Other festivals have also announced that the band will no longer be performing.

“When people choose to defend something, then I think they should be held accountable for it,” said Daniel Stedman, a founder of the Northside Media Group, which runs the Brooklyn festival.

After Turner’s sentencing last week, Mr Stedman said he found himself moved to tears as he read the graphic courtroom statement from the woman Turner raped. It has been widely distributed since, describing the attack and what followed.

“How does the average person who is really upset and troubled about the Brock story, how does somebody participate in that, making right of a wrong?” Mr Stedman said. “We are really just one tiny, infinitesimal part of that puzzle, but I think it was a no-brainer for us.”

In her letter, Ms Rasmussen (20) says that there was a distinction between rape and Turner’s case and suggested that alcohol was to blame for his actions. Turner (20) a top-rated Stanford swimmer, was found by two passers-by, partially clothed behind a trash bin on campus, on top of the 23-year-old woman, who was incapacitated by alcohol, according to the authorities. The passers-by stopped the assault and held Turner down as he tried to flee.

“I don’t think it’s fair to base the fate of the next ten + years of his life on the decision of a girl who doesn’t remember anything but the amount she drank to press charges against him,” Ms Rasmussen, who plays drums in the band, wrote.

“But where do we draw the line and stop worrying about being politically correct every second of the day and see that rape on campus isn’t always because people are rapists.”

Turner was convicted of three counts of felony sexual assault for the attack, which took place in January 2015. This week the judge in the case, Aaron Persky of Superior Court in Santa Clara County, California, came under withering criticism from the public for the sentence he imposed: six months in jail and probation.

Ms Rasmussen’s letter was part of a package of character letters sent to the judge on behalf of Turner before his sentencing, a standard practice in which people seek to influence a sentencing decision by sharing their experiences of the defendant.

His father also sent a letter that had an even more explosive effect when it was made public this week; he said that the episode had affected his son’s appetite and that, in particular, he no longer enjoyed rib-eye steaks.

Following the firestorm her letter provoked, Ms Rasmussen said her words were being twisted and that she was being unfairly stigmatized. “This appeal has now provided an opportunity for people to misconstrue my ideas into a distortion that suggests I sympathize with sex offenses and those who commit them or that I blame the victim involved,” she said in a statement.

Ms Rasmussen also believed that the letter to judge was private. But a spokesman for the court said she was wrong and such letters, like most documents entered into the court, are a matter of public record.

Within hours of Ms Rasmussen’s letter being made public by New York magazine, Good English was removed from a roster of Brooklyn venues where they were scheduled to perform in the coming days, including Rock Shop, Industry City Distillery, Gold Sounds and Bar Matchless.

“We don’t want to be affiliated with anyone that’s going to try to victim-blame or even just downplay rape,” said Larry Hyland, an owner of Bar Matchless.

Mr Hyland said he had received more than 50 emails and posts on the bar’s Facebook page demanding that the band’s show be cancelled.

Some of the messages, he said, included threats to confront the band members if they did perform. “We didn’t cancel the show because of censorship,” he said, adding that while he disagreed with the content of Ms Rasmussen’s letter, he understood the impulse to want to help a childhood friend.

“I wanted to avoid an unsafe environment.”

On Tuesday, the Dayton Music Art and Film Festival near the band’s hometown announced that it, too, was removing the band from its September lineup.

“Such actions should not be defended, friend or not,” the festival wrote on its Facebook page. On Wednesday, Behind the Curtains Media, the public relations firm that represented Good English, dropped them from its client roster.

In her statement, Ms Rasmussen attributed the fallout from her initial letter not to what she wrote but to “the overzealous nature of social media”.

In particular, she lamented the “uproar of judgment and hatred unleashed on me” and the effect it was having on her musical aspirations.

A post on a Facebook page appearing to belong to Leslie Rasmussen has since said she made a mistake regarding the case and apologised for not acknowledging the severity of the crime.