At least 150 pregnant women in US may have Zika virus 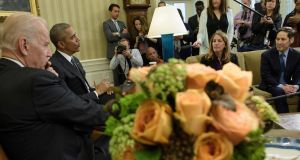 US president Barack Obama speaks as vice-president Joe Biden, US Secretary of Health and Human Services Sylvia Burwell, National Institute of Allergy and Infectious Diseases director Anthony Fauci and members of the press listen after a meeting about the Zika virus in the Oval Office of the White House. Photograph: Brendan Smialowski/AFP/Getty Images

Doctors are monitoring 279 pregnant women with confirmed or suspected Zika virus infections in the US and its territories, federal health officials said Friday.

Of those women, 157 are in the 50 states and the District of Columbia, and 122 are in territories, including Puerto Rico.

Public health officials are gathering data on the health consequences of the infection, including the rate at which fetuses develop abnormally shrunken heads and brain damage, a birth defect called microcephaly.

On Friday, the World Health Organization confirmed that the strain of Zika virus in Cape Verde, just off the western coast of Africa, is the same strain that is spreading in Brazil. Almost 200 pregnant women in Cape Verde have been infected, and the virus has been blamed for three cases of microcephaly there.

The rising numbers of pregnant American women testing positive – Friday’s figure is more than double the previous count of 113 – reflect a new case definition used by the Centers for Disease Control and Prevention rather than a surge in cases, according to Margaret Honein, the chief of the agency’s birth defects division.

No cases transmitted by mosquito have yet been reported in the 50 states. The number of infected pregnant women in the US began rising dramatically in February, probably reflecting the spread of the Zika virus from Brazil to more countries visited by Americans.

Most of the 279 women are still pregnant, Dr Honein said, and fewer than a dozen have experienced “adverse outcomes”, such as stillbirths, microcephaly or other congenital problems.

A “relatively small number” of the infections clearly resulted from sexual transmission rather than mosquito bites, she added. But in most cases, it was difficult to determine how the women became infected because they had lived in or had travelled to areas where mosquitoes carrying the virus were biting.

The CDC previously reported only pregnant women with symptoms such as rash, fever or bloodshot eyes. But “we’ve learned a lot in the last four months,” Dr Honein said.

At least four published studies have cited cases in which women with no memory of having symptoms gave birth to children with birth defects. The new case definition includes all women who have had a positive test for Zika virus, or are likely to test positive for antibodies to it.

Antibody tests are not as accurate as tests for the virus itself because previous infections with dengue fever or shots to prevent yellow fever can create false positives.

“CDC wants to make sure we are monitoring all women at risk for poor outcomes,” said Denise J Jamieson, a co-leader of the pregnancy and birth defects team at the agency. Each Thursday, the agency will update the number of infected pregnant women in the United States, officials said.

The outbreak in Cape Verde, a Portuguese-speaking country with close links to both Brazil and West Africa, has been a puzzle for months. The intense outbreak in the island nation started last October, just as Brazil’s surge in microcephalic babies was detected. But confirmation that it was caused by the Brazilian strain, rather than the much older African one, did not come until the Pasteur Institute in Dakar, Senegal, sequenced the genomes of the infecting viruses.

Cape Verde’s outbreak is now fading, said Matshidiso Moeti, the WHO’s regional director for Africa, and there has been no outbreak in Senegal, which she called Cape Verde’s “door out to other countries”.

Although that might suggest that Africans have some immunity, “it’s never good news to hear that a virus with neuropathic effects is on your doorstep,” said Bruce Aylward, the WHO’s chief of emergency response.

Referring to the funding US president Barack Obama has requested, “anything short of that will be insufficient,” said Eric Schultz, the deputy White House press secretary.

Mr Obama wants the US Congress to provide close to $1.9 billion for vaccine development, faster diagnostic tests, and new tools for killing the mosquitoes that carry the virus.

“We’ve got to get moving,” Mr Obama told reporters after meeting top health officials in the Oval Office on Friday. “This has to get done over the course of the next several weeks in order for us to be able to provide confidence to the American people that we’re handling this piece of business.”