‘An ally should be dependable’: Macron on US withdrawal from Syria 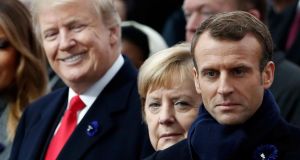 In an abrupt policy shift, Mr Trump announced on Wednesday that Washington would withdraw the roughly 2,000 US troops in Syria, upending a pillar of American policy in the Middle East and alarming allies of the US.

“I very deeply regret the decision made on Syria,” Mr Macron said during a news conference in Chad. “To be allies is to fight shoulder to shoulder. It’s the most important thing for a head of state and head of the military. An ally should be dependable.”

Mr Macron stressed the importance of the work of the Kurdish-led Syrian Democratic Forces, which has captured large parts of northern and eastern Syria from Islamic State, also known as Isis.

US officials justified the decision by saying Islamic State had been defeated.

I am pleased to announce that our very talented Deputy Secretary of Defense, Patrick Shanahan, will assume the title of Acting Secretary of Defense starting January 1, 2019. Patrick has a long list of accomplishments while serving as Deputy, & previously Boeing. He will be great!

He had been expected to remain until the end of February, despite a resignation letter in which he levelled severe criticism at the president over his foreign policy and treatment of allies.

Brett McGurk, the special presidential envoy to the coalition fighting Islamic State, has meanwhile accelerated his resignation, telling colleagues this weekend that he could not in good conscience following the Syria announcement by Mr Trump.

Mr McGurk, a seasoned diplomat who was considered by many to be the glue holding together the sprawling international coalition fighting the terrorist group, was supposed to retire in February. But according to an email he sent his staff, he decided to move his departure forwards to December 31st after Mr Trump did not heed his own commanders and blindsided America’s allies in the region by abruptly ordering the withdrawal of the 2,000 troops.

His decision comes right after the departure of Mr Mattis. “The recent decision by the president came as a shock and was a complete reversal of policy that was articulated to us,” Mr McGurk wrote in the email to his colleagues. “It left our coalition partners confused and our fighting partners bewildered,” he added.

“I worked this week to help manage some of the fallout but – as many of you heard in my meetings and phone calls – I ultimately concluded that I could not carry out these new instructions and maintain my integrity,” he said.

Mr McGurk had more than a decade of experience in Iraq spanning three administrations and helped stitch together the 79-member coalition led by the United States, which oversaw the battle to take back cities from the terrorist group. He became special envoy in late 2015, during the Obama administration.

In a shift from the way the insurgency had been fought during the Bush administration, one of the Obama administration’s core doctrines was that the US’s allies in the region needed to take the lead in recapturing territory, with US forces providing only air support and limited logistical assistance.

This meant that the ground war to take back key cities captured by Islamic State, such as Mosul in Iraq and Raqqa in Syria, took years to mount. And it came down to the 45-year-old McGurk to negotiate alliances and broker military aid to the mosaic of armed groups and governments vying for control of the region. – Reuters/New York Times