American Letter: Mom’s the word when your child is trying to fit in with a new culture 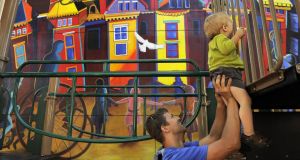 A neighborhood playground in Washington DC. Irish children in the US are under pressure to blend in with their peers. Photograph: Getty Images

It was always going to happen; I just I didn’t expect it to happen so soon. There are few traces of little Amy Rose Carswell’s Dublin accent left after 10 months of living in the United States.

Gone are the heavily accentuated words my three-year-old picked up at her creche in inner-city Dublin – “Daddy, can I have a bah-loo-an [balloon]?” and “Open your aye-ez [eyes]” – replaced by Americanisms like “Daddy, I ray-ally, ray-ally want a popsicle.”

She had us in stitches one day recently when she randomly announced from her car seat: “I’m pretty awe-some,” and then responded to our laughter by asking, in her new American twang: “Did I say something weird?”

Of course, it doesn’t just end with just the accent. A plaster is now a “band-aid” and spaghetti are noodles. She corrected me in the playground a few months back when I asked her did she have fun playing football with two girls she befriended. “No Dad, it’s soccer!” she said.

She set my wife straight recently when Vanessa mentioned her classroom’s pet snake Sasha. “No, Mom, it’s Sah-sha!” Vanessa briefly despaired at Amy dropping the use of “Mama” in favour of the all-American “Mom”.

Accentuate the positive
Amy, like any child her age, is speaking to be understood and to fit in with her peers. The public schools in the District of Columbia accept children from the age of three in preschool classes, a year before pre-kindergarten class. She is revelling in the fun atmosphere of a local elementary school.

Unexpectedly, our daughter Kate, who will turn two in February, has picked up a Co Meath accent – “com hee-ahr, Daddy” – from spending a few mornings each week with a toddler son of a friend who hails from Ashbourne, proving that children are sponges to the influences around them.

On one notable occasion, however, during Halloween trick-or-treating in the Capitol Hill neighbourhood, Kate did succumb, shouting: “Kan-dee! Kan-dee!” but that had more to do with the irresistible lure of chocolate.

When President Obama appointed his Irish-born aide Samantha Power as the new US ambassador to the United Nations in June, she said in remarks at the White House announcement that she had a thick Dublin accent when she and her family emigrated to Pittsburgh, Pennsylvania when she was nine.

Recalling her attempts to blend in, she said: “I came home from school every day, as my mother can attest, my dad can attest, and I sat in front of the mirrors for hours, straining to drop my brogue so that I, too could quickly speak and be American.”

Power’s experience is not surprising, particularly for a child in a new country. Americans often struggle to understand an Irish accent, particularly over the phone, and this can turn you a little American. I find myself pronouncing some of the trickier words with a slight American intonation to avoid having to repeat myself, often several times.

The way we Irish say the letter “r”, for example, can trip you up over here. We pronounce it “or” while most Americans say “are” so I frequently find myself over-compensating when I try to make myself understood on a telephone call and sounding like a pirate when I spell out the “r” in my surname.

Amy hasn’t been here long enough to have developed an accent specific to Washington DC, not that the US capital has as distinct an accent as some of the cities up the northeastern seaboard such as Boston – “Just pahk the cah in Hahvahd yahd” – or Noo Yawk.

Not far out of Washington, into Virginia, the southern drawl starts to develop, but it’s not typical among residents of the District unless you happen to bump into a Capitol Hill staffer from a southern state, of which there are plenty.

Covering almost four million square miles with a population of about 316 million people, the United States is a patchwork quilt of accents and dialects.

More than a decade ago, academic Robert Delaney at Long Island University in New York drew up a map of America charting 24 regions of “American English” – from eastern New England where they swap their ‘r’s for ‘h’s to Louisiana where the unique blend of Cajun French, Spanish and Cajun English turns New Orleans into “Nawlins”.

Irish influence
Curiously, Delaney found in his research Irish influence in the dialect of the Mission neighbourhood of San Francisco, similar to New York’s dialect, as a result of the arrival of Irish Catholics there, while Scottish-Irish settlers brought a particular intonation to parts of the American midwest and Great Plains.

Several years of living in the United States will undoubtedly have an influence on Amy’s accent and vocabulary. A friend joked that a few episodes of Love/Hate should get her Dublin accent back.