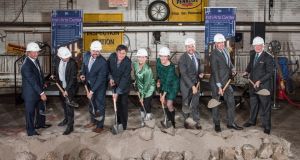 Actor Gabriel Byrne was joined by Ciarán Madden, Consul General of Ireland and other dignitaries and members of the Irish Arts Centre board as they broke ground today on the New Irish Arts Centre in New York on Thursday.

The Irish Arts Centre in New York is on track to move into a new home as early as 2020 as construction officially began on the long-awaited project.

The ceremony marked the start of construction of Phase One of the new facility – a state-of-the-art building on 11th Avenue.

Founded in 1972, the Irish Arts Centre has been a leading centre for Irish cultural life in the United States. It is currently housed in an old tenement building on West 51st Street in the Hell’s Kitchen area of Manhattan. But the centre has long sought a larger space than its current building which can seat fewer than 100 people.

In addition to a major fundraising campaign, the Irish Government, New York city and state and private donors have contributed funding to the campaign.

In a boost for the project, the City of New York announced a $5 million (€4.3 million) grant on Thursday to help develop the centre’s current home at West 51st Street – Phase Two of the project.

Speaking at the ceremony, Gabriel Byrne, a longterm supporter of the centre, said the new project was “not just a new building – it’s a new understanding of who we are and how we relate to the world”.

“We need a place where the new voices of Ireland and Irish America can be nourished and celebrated and born. The New Irish Arts Centre is that place,” he said.

Corey Johnson, Speaker of the New York City Council, said the city was proud to help fund the new centre.

“Irish heritage is an integral part of New York City history and the Irish Arts Centre does so much to preserve that history and celebrate Irish and immigrant culture in the five boroughs,” he said.

The new building has been designed by the Office of Public Works and New York-based architectural firm Davis Brody Bond, which was behind the landmark September 11th memorial and museum in lower Manhattan. It is expected to be completed by 2020.

It will house a flexible theatre for use for multidisciplinary performances, installations and special events, as well as classrooms and studio spaces. It is ultimately envisaged that the Centre’s current theatre on 51st street will be renovated and used as a more intimate second venue.