Catalan ex-leader gets freedom to campaign for independence 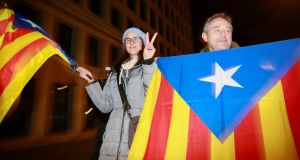 Catalonia’s former leader Carles Puigdemont was spared custody on Monday, when a Brussels court ruled he could remain at liberty in Belgium until it had heard Spanish charges against him of rebellion.

The court’s decision means Mr Puigdemont, who left Spain last month after Madrid fired his secessionist government and dissolved the Catalan parliament, is free to campaign for independence in an election in the region on December 21st.

Mr Puigdemont said on Monday his government’s actions were legitimate and criticised the Spanish judicial system for a “clear lack of independence and neutrality”.

The December vote is shaping up to be a de facto independence referendum.

Mr Puigdemont’s PDeCAT and another secessionist party said at the weekend they might run on a combined ticket, but would need to make a decision on any formal alliance – which might also include other parties – by a deadline of Tuesday.

Alliances could however also form after the election.

The independence push has dragged Spain into its worst political crisis since its return to democracy four decades ago. It has deeply divided the country, fuelling anti-Spanish feelings in Catalonia and nationalist tendencies elsewhere.

Mr Puigdemont volunteered himself to Belgian police on Sunday along with four of his ex-ministers, after Spain issued a European arrest warrant on charges of rebellion as well as misuse of public funds.

All five are barred from leaving Belgium without a judge’s consent.

They will appear before a Belgian court on November 17th for a hearing to discuss the arrest warrant, prosecutors in Brussels said in a statement.

Mr Puigdemont, writing in the Guardian, called for scrutiny of the Spanish judicial system and said the crisis could be solved only with a political and not a judicial solution.

“Does anyone think that the sacked Catalan government can expect a fair and independent hearing, uninfluenced by political and media pressure? I do not,” he wrote.

Spain’s central government took control of Catalonia, which accounts for a fifth of the national economy, after local leaders held an independence referendum on October 1st, despite a Constitutional Court ban.

The region’s parliament then passed a unilateral declaration of independence. In response, Spain’s prime minister Mariano Rajoy fired the government and called the snap regional elections.

Eight of Mr Puigdemont’s allies stayed behind in Spain and have been detained on similar accusations to the ones the deposed leader faces.

On Sunday, the first part of a GAD3 survey showed that pro-independence parties would win the election in Catalonia, but may not gain the parliamentary majority needed to continue with secession.

On Monday, the second part showed just one in seven people in the region believe the current standoff between Barcelona and Madrid will end in independence, while more than two thirds think the process has been bad for the economy.

Optimism that a negotiated solution would be found was low, with just over a fifth of respondents thinking the crisis would lead to talks between regional authorities and Madrid.

The uncertainty has prompted more than 2,000 companies to relocate their legal headquarters out of the region since October 1st. The Bank of Spain has said that if the conflict persists it could lead to slower growth and job creation. – Reuters