First known case of Zika transmitted in US was contracted sexually, say officials 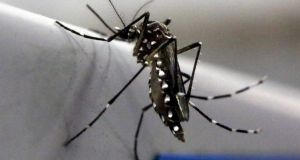 A new method to render male mosquitoes infertile by nuclear radiation could help reduce populations of insects carrying the Zika virus linked to thousands of birth defects in Brazil, the UN atomic agency has said.

Also on Tuesday, the first known case of Zika virus transmission in the US was reported in Texas by local health officials, who said it was contracted through sexual contact.

Experts from the Vienna-based International Atomic Energy Agency are to meet Brazilian officials on February 16th to discuss how best to roll out so-called Sterile Insect Technology (SIT) in the host country of the 2016 Summer Olympics.

“If Brazil released a huge number of sterile males, it would take a few months to reduce the population, [but] it has to be combined with other methods,” IAEA deputy director general Aldo Malavasi told reporters.

Besides SIT, the spread of the Zika virus, which the World Health Organisation (WHO) has declared an international public health emergency, could be fought by more intense sanitation efforts, the use of insecticides or traps.

SIT, adapted from decades-old methods used to slash populations of other insects such as fruit flies, involves exposing males of the Aedes aegypti mosquito to X- or Gamma rays to render their sperm sterile.

Such laboratory-bred male mosquitoes could then be released in the wild to mate with the females of the species who then bear eggs that never hatch, thus reducing the number of insects in a given area without killing any animals or using chemicals.

“It’s family planning for insects,” said Jorge Hendrichs, head of the Insect Pest Control Section at the IAEA, which offers the technological know-how to interested member countries for free so they can design and run their own SIT programmes.

The sterile males, one generation of which takes about a month to breed, must outnumber the indigenous males by a factor of 10 or 20 to make their mark in a mosquito population.

This requires millions of males, making the method more likely to be used in villages or towns, rather than large cities, Mr Malavasi said.

In test runs over several months in Italy, SIT helped cut mosquito populations by about 80 percent and in China the success rate was as high as 100 per cent, Konstantinos Bourtzis of the IAEA’s insect pest control laboratory said.

Apart from Brazil, other countries such as Mexico, Guatemala, El Salvador and Indonesia have also requested the technology from the IAEA to control local mosquito populations.

According to the WHO, the Zika virus is “spreading explosively” and could infect as many as 4 million people in the Americas.

The Pan American Health Organisation says Zika has spread in 24 nations and territories in the Americas.

Meanwhile, the first known case of Zika virus transmission in the US was reported in Texas on Tuesday by local health officials, who said it was contracted through sexual contact and not the bite of a mosquito, a day after the WHO declared an international public health emergency.

Dallas County Health and Human Services said it received confirmation of the case in Dallas from the US Centers for Disease Control and Prevention.

County authorities said there were no reports of the virus being locally transmitted by mosquitoes in the Texas county.

A CDC spokesman confirmed the results of a test for Zika infection but said local officials investigated the mode of transmission.

Experts have said a Zika vaccine for widespread use is months if not years away.

A Zika case has been identified on mainland Chile for the first time in a man who had traveled to Colombia, where the virus is circulating, local media reported.

An Australian state health service also said two Australians were diagnosed with the virus after returning from the Caribbean, confirming the first cases of the virus in the country this year.