Migrant deaths: Police speak to one of Hughes brothers

Investigating officers urge men to hand themselves in to PSNI 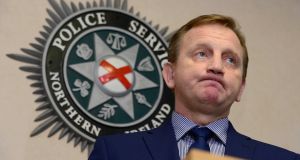 Detectives investigating the deaths of 39 migrants found in a trailer in Essex last week have spoken to one of two brothers from Northern Ireland sought by English police in connection with the fatalities.

Speaking to reporters in Belfast on Friday, Det Chief Insp Daniel Stoten, of Essex Police, said the force had spoken to Ronan Hughes (40) by telephone, but urged him and his brother Christoper (34) to hand themselves in.

The two, from Armagh, are wanted for questioning on suspicion of manslaughter and human trafficking.

Det Chief Insp Stoten said the Police Service of Northern Ireland (PSNI) stopped and seized lorry on Thursday believed to be connected to the Hughes brothers but no arrests were made.

The trailer in which the bodies were found in Grays, Essex on October 23rd had been leased to Ronan Hughes. The brothers are said to have links to Northern Ireland and the Republic and the road haulage and shipping industries.

“Today I want to make a direct appeal,” Det Chief Insp Stoten said. “Ronan and Christopher, hand yourselves in to the Police Service of Northern Ireland.

“We need you both to come forward and assist this investigation. Although we have already spoken to Ronan Hughes recently by telephone, we need to have a conversation with him and his brother in person.

He also issued an appeal for members of the public to come forward with information.

“It is essential we follow all lines of inquiry and bring those responsible for these tragic events to justice...We urge anyone who has been in contact with them or has any information about where they are to get in contact with us.”

Det Chief Insp Stoten said the force would continue to work with the PSNI and Garda until the brother “come forward or are arrested”.

Police originally said the victims of the incident were Chinese nationals, but on Friday night said they believed the dead were Vietnamese men and women.

“We are in direct contact with a number of families in Vietnam and the UK, and we believe we have identified families for some of the victims whose journey ended in tragedy on our shores,” Assistant Chief Constable Tim Smith said.

The man driving the truck when the bodies were found, Maurice Robinson (25), of Laurel Drive, Craigavon, has been charged with 39 counts of manslaughter, conspiracy to traffic people, conspiracy to assist unlawful immigration, and money laundering. He due before the Old Bailey on November 25th.

Det Chief Insp Stoten said he would like to thank all those who have come forward with information for providing “invaluable” help. He said he knew they were “as appalled as the rest of the world” at the deaths.

“Finding Ronan and Christopher Hughes is crucial to our investigation and the sooner we can make this happen, the sooner we can get on with our enquires and bring those responsible for these tragic deaths to justice,” he said.