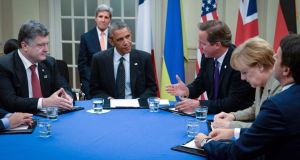 Ukrainian president Petro Poroshenko and the main pro-Russian rebel leader said they would both order ceasefires tomorrow, provided that an agreement is signed on a new peace plan to end the five month war in Ukraine‘s east.

The first apparent breakthrough of its kind in the war comes after a week in which the pro-Moscow separatists scored major victories with what Nato says is the open support of thousands of Russian troops.

Speaking on the sidelines of a Nato summit at Celtic Manor in Wales, Mr Poroshenko said the ceasefire would be conditional on a planned meeting going ahead in Minsk tomorrow of envoys from Ukraine, Russia and the OSCE security watchdog.

“At 1400 local time (11am GMT), provided the (Minsk) meeting takes place, I will call on the General Staff to set up a bilateral ceasefire and we hope that the implementation of the peace plan will begin tomorrow,“ Mr Poroshenko told reporters.

Rebel leader Alexander Zakharchenko said in a statement that the separatists would also order a ceasefire, from one hour later, provided that Kiev‘s representatives signed up to a peace plan at the Minsk meeting.

The announcements come a day after Russia’s president Vladimir Putin put forward a seven-point peace plan, which would end the fighting in Ukraine‘s east while leaving rebels in control of territory.

So far there has been no sign of a halt in fighting in the east, where rebels have rapidly advanced in the past week, backed by what Kiev and Nato say is the support of thousands of Russian troops with artillery and tanks.

Moscow denies its troops are there, in the face of what the West says is overwhelming evidence.

Mr Poroshenko won support from Western leaders at the Nato summit. The West has backed Kiev by imposing economic sanctions on Moscow, but has also made clear it will not fight to protect the country, where pro-Russian rebels rose up in two provinces after Moscow annexed the Crimea peninsula in March.

The Ukrainian president was invited to meet US president Barack Obama, Germany‘s Angela Merkel, France‘s Francois Hollande and other Western leaders at the summit, hosted by Britain‘s David Cameron.

“To the east, Russia has ripped up the rule book with its illegal, self-declared annexation of Crimea and its troops on Ukrainian soil threatening and undermining a sovereign nation state,“ Mr Obama and Mr Cameron wrote in a joint newspaper editorial.

Mr Hollande brought the biggest surprise on the eve of the summit: postponing the delivery of a helicopter carrier warship to Russia, a measure he had long resisted. Moscow accused him of caving in to US political pressure.

“France‘s reputation as a reliable partner that carries out its contractual obligations has been thrown into the furnace of American political ambitions,“ a Russian foreign ministry spokeswoman said.

A Nato military officer, who declined to be named, said today that Russia had several thousand combat troops and hundreds of tanks and armoured vehicles inside Ukraine.

“We are still seeing several thousand Russian combat troops on the ground inside Ukraine, equipped with hundreds of tanks and armoured vehicles, so (there is) no substantial change in the disposition of Russian forces inside Ukraine,” the Nato officer said on the sidelines of the summit in Wales.

Around 20,000 Russian troops remain close to the Ukrainian border, he said.

Nato secretary-general Anders Fogh Rasmussen has accused Moscow outright of attacking Ukraine as allied leaders gathered for a summit to buttress support for Kiev and bolster defences against a Russia they now see as hostile for the first time since the Cold War.

“We are faced with a dramatically changed security environment,” Mr Rasmussen told reporters on arrival at the summit. “To the east, Russia is attacking Ukraine.”

His statement stepped up Western rhetoric against Moscow and set the tone for a two-day meeting marked by a return to east-west confrontation 25 years after the fall of the Berlin Wall.

The past few days have seen conflicting signals from both Moscow and Kiev. Mr Putin made a number of belligerent statements over the past week before unveiling his peace proposal yesterday and discussing it by telephone with Mr Poroshenko.

“The surge in anti-Russian rhetoric that we have seen exactly when there is a very active effort to seek a political solution shows that the party of war in Kiev has active external support, in this case from the United States,“ he said.