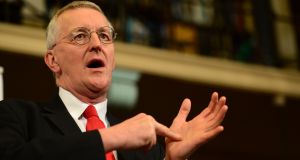 Hilary Benn: “Twenty-three months after the referendum and 14 months since the triggering of article 50, we still don’t know what the UK’s future relationship with the EU will be . . .” Photograph: Dara Mac Dónaill

Britain has warned the European Union that excluding it from the Galileo satellite navigation system could limit the scope of future security co-operation and justify a reduction in the size of the Brexit bill. In a paper addressed to EU negotiators, Theresa May’s government protested against the fact that it is already excluded from post-2019 planning for Galileo, the EU’s alternative to the American GPS navigation system.

“From a security perspective, any gap in UK involvement in the design and development of Galileo and PRS, whereby the UK is unable to manufacture components or assure those manufactured by member states at any point, will constitute an irreparable security risk. It will mean the UK will not be able to rely on the system for our own security and defence needs,” it said.

Britain opposed the Galileo initiative in the early 2000s but it is now demanding unrestricted security and industrial access after Brexit to secure elements of the €10 billion programme. It also wants British companies to be able to tender for contracts linked to the programme’s highly secure military grade signal, the Public Regulated Service, from which non-EU member states are excluded.

In the paper, Britain suggests it could develop its own rival to Galileo and that it could demand that its €1 billion investment in the programme to date should be deducted from the Brexit bill.

“The exclusion of these UK sunk costs was agreed on the basis that the UK would retain full access. Should the UK’s future access be restricted, the UK’s past contribution to the financing of space assets should be discussed,” it says.

The row over Galileo came as the House of Commons Brexit committee said that Britain may have to stay in the EU’s customs union beyond 2020 if it cannot agree new arrangements in time for the end of the transition period in 2023. In its latest report on the state of the negotiations, the committee said it was “highly unsatisfactory” that, nearly two years after the referendum, ministers have yet to agree, and set out in detail, what kind of trading and customs arrangements they wish to seek in negotiations with the EU.

The report also criticised the lack of clear proposals to maintain a frictionless border in Ireland and the British government’s failure to outline its own proposal for a backstop arrangement.

“It is clear that the EU is expecting clarification from ministers by the time of the European Council meeting in June about how the backstop will work. The government needs to come forward with its proposals as soon as possible to demonstrate how an open border, with no checks and no infrastructure, can be maintained,” committee chair Hilary Benn said.

“Twenty-three months after the referendum and 14 months since the triggering of article 50, we still don’t know what the UK’s future relationship with the EU will be on trade, services, security, defence, consumer safety, data, broadcasting rights and many other things. The clock is now running down and parliament will need clarity and certainty by the time it is asked to vote on a draft withdrawal agreement in the autumn. We wait to see whether the promised White Paper next month will provide it.”