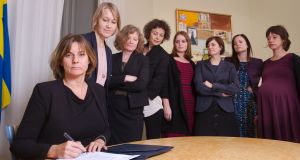 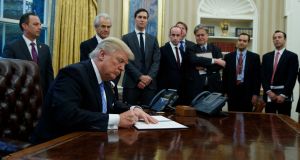 US president Donald Trump signs an executive order implementing a federal government hiring freeze on January 23rd in the Oval Office of the White House in Washington. Photograph: Evan Vucci/AP

Sweden’s deputy prime minister, Isabella Lövin, has published a photograph of herself signing a climate bill surrounded by her closest female colleagues, apparently mocking a photo of US president Donald Trump.

Ms Lövin, who also serves as environment and development aid minister, is seated in the photo at a desk as she signs the bill under the watchful eye of seven female colleagues, including one who is visibly pregnant.

The picture seems to be a reference to a series of photos of Donald Trump signing executive orders , including the reintroduction of the ‘global gag rule’, which were widely mocked.

The pictures were taken of Donald Trump on January 23rd in the White House, as he signed a decree barring US federal funding for foreign NGOs that support abortion, as his all-male colleagues looked on.

Sweden, a pioneer in women’s rights, is known for its high level of women in the workplace, including in parliament and government.

“We are a feminist government, which shows in this photo. Ultimately it is up to the observer to interpret the photo,” Ms Lövin said.

The climate bill she is signing in the photo aims to make Sweden carbon neutral by 2045 and “marks a new era in Swedish climate politics,” Ms Lövin wrote.

Just signed referral of Swedish #climate law, binding all future governments to net zero emissions by 2045. For a safer and better future. pic.twitter.com/OqOO2y8BU6

“There is a global demand for climate leadership. I want to show that Sweden is ready to take that leadership,” she added.

Sweden has criticised the Trump administration’s approach to climate policy as it announced legislation binding future governments to a goal of phasing out greenhouse gas emissions by 2045, among the most ambitious by any developed nation.

Ms Lövin urged European countries to take a leading role in tackling climate change, now “the US is not there anymore to lead”.

Seven of eight political parties - all but the far-right Sweden Democrats - agreed to pass a binding law obliging future governments to set tougher goals to cut fossil fuel use every four years. The law will come into force from 1 January 2018.

Sweden’s goal would demand at least an 85 per cent cut in domestic greenhouse gas emissions by 2045 from 1990 levels, the government said. Remaining emissions would be offset, for instance by planting forests that soak up carbon as they grow or by investments abroad.

The European Union as a whole has set a target of an 80-95 per cent reduction in greenhouse gas emissions by 2050.

“2045 is a good year,” Ms Lövin said of the target for reaching zero net emissions, adding: “I personally believe we could get there even earlier.”

Among EU nations, she said, Britain , Denmark and Finland have also passed climate laws meant to make long-term policies less easily overturned and to give more certainty to investors.

By contrast, Mr Trump has called climate change a hoax and wants to bolster the domestic coal and fossil fuel industries. He has threatened to pull out of a 2015 Paris agreement on climate change but also said he has an “open mind”.

Ms Lövin said Sweden wanted to set an example at a time when “climate sceptics [ARE ]really gaining power in the world again,” and felt encouraged by pledges by China and India to fulfil their commitments to the Paris Agreement.

China is “investing billions and billions of dollars in solar ? it’s a game changer,” she said, warning that “those that are still wanting to invest in fossil fuels will be ultimately the losers.”