Iran has angrily dismissed Trump as inexperienced and dangerous 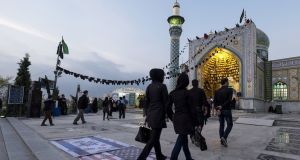 People step on a US flag and an Israeli flag at a shrine on Ashura in the north of Tehran. Photograph: Raheb Homavandi/Reuters

The imposition of new US sanctions on Iran, only two weeks after the Obama administration left office, has raised fears that Donald Trump is gearing up for a new confrontation by branding Tehran the “champion” of global terror.

But suggestions that Mr Trump is planning unilateral action to scrap or bypass the landmark nuclear deal with Iran, agreed in 2015 by the US, the four other permanent members of the UN security council and the EU, may prove wide of the mark.

A more likely prospect is a ramping-up of American efforts to characterise Shia Muslim Iran as the world’s headquarters and foremost sponsor of terror and roll back its expanding influence across the Middle East region.

Mr Trump’s hostility to Iran has not abated since he singled it out during the presidential campaign. Iranian citizens were included in the US president’s infamous travel ban on seven mainly Muslim countries. Last week Mr Trump’s national security adviser, Michael Flynn, furiously condemned an “illegal” Iranian ballistic missile test.

Mr Flynn said the US was putting Iran “on notice” that its behaviour was unacceptable. “The days of turning a blind eye to Iran’s hostile and belligerent actions toward the United States and the world community are over,” he said.

The new sanctions announced on Friday are largely symbolic. The White House says they are just a beginning, and that it has launched a strategic review of Iran policy. But the new administration knows an attempt to overturn the nuclear deal would be fiercely opposed by its other signatories.

Analysts suggest the US will instead attempt to strengthen the accord by introducing tougher inspections and extending its curbs.

A new strategic approach is meanwhile evolving. An indication of its likely focus was contained in remarks made by James Mattis, the US defence secretary, during a visit to Tokyo.

He called Iran “the single biggest state sponsor of terrorism in the world” - a fact, he said, that could not be ignored or dismissed. In his briefing last week, Mr Flynn explicitly focused on Iran’s support for Shia Muslim Houthi “terrorists” in Yemen, claiming Iran was behind recent attacks on Saudi and US warships.

All this fits with Mr Trump’s top stated foreign policy priority: fighting terror. Iran’s steadfast support for Bashar al-Assad, Syria’s president, including the deployment of Iranian-led military units and fighters from its Hezbollah ally in Lebanon, has won it unprecedented leverage.

Its advances have opened up the possibility of an “arc” of Iranian influence stretching from western Afghanistan to the eastern Mediterranean.

The US classifies Hezbollah as a terrorist organisation. US allies in the Gulf, notably Saudi Arabia, are nervous. Bahrain’s Sunni rulers, who preside over a majority Shia population, are especially jittery about alleged covert destabilisation.

Mr Trump spoke to King Salman, the Saudi monarch, last week. Mr Trump is also due to meet Benjamin Netanyahu on February 15th. Israel’s hawkish prime minister has long warned of the existential threat posed by Iran. Israel has complained repeatedly about Iran’s backing for Hamas and other designated terrorist groups, and about its alleged weapons smuggling into Lebanon and Syria.

Mr Netanyahu can be expected to enthusiastically support a tougher Trump line.

Also on side is Theresa May, Britain’s prime minister. She referred to the “malign influence” exerted by Iran in a recent speech. Like Mr Trump, Mrs May has offered unusually strong support for Israel. Not on side at this point are leading EU countries, who simply do not trust the US leader.

What form will Mr Trump’s anticipated anti-Iran drive take? It could involve more sweeping banking and financial sanctions, increased arms sales and overt military support for regional allies, a heightened US naval presence in the Gulf, or more special forces covert operations like that which went disastrously wrong in Yemen last week. Mr Trump may also seek to make the Iran travel ban permanent.

The escalation in tensions comes at a sensitive time in Iran. Presidential elections are due this spring. American hostility could strengthen hardline conservative nationalists.

There is one more Trump card to play. If he succeeds in his controversial aim of improving relations with Vladimir Putin, Mr Trump could prevail on Russia to curtail its missile sales, nuclear assistance and diplomatic collaboration with Tehran. Given its bitter history of invasion by the great powers, Iran has good reason to fear encirclement. A putative US-Russia pact threatens exactly that.