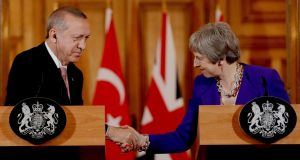 Turkey’s president Recep Tayyip Erdogan and British prime minister Theresa May shake hands during a news conference after their meeting at 10 Downing Street on Tuesday. Photograph: Matt Dunham/Pool via REUTERS

Theresa May has called for an independent investigation into the killing by Israeli defence forces of dozens of Palestinian protesters on Monday.

Speaking during a joint press conference at Downing Street with Turkish president Recep Tayyip Erdogan, the British prime minister declined to blame Israel for the violence.

“There is an urgent need to establish the facts of what happened yesterday through an independent and transparent investigation,” she said.

“The loss of life we have seen is tragic and extremely concerning. Such violence is destructive to peace efforts and we call on all sides to show restraint. There is an urgent need to establish the facts of what happened yesterday through an independent and transparent investigation, including why such a volume of live fire was used – and what role Hamas played in events.”

Ms May said the use of live fire by Israeli forces was “deeply troubling” and urged Israel to show restraint.

Mr Erdogan issued a forceful denunciation of Israel and said the international community must choose whose side it was on.

“You are powerful but you are not right. History will not forgive you and this is the fact we will observe in the future. Israel will not be forgiven,” he said.

“So it all boils down to making a choice. Are we going to side with the strong, or side with those who are right?”

Earlier, Labour leader Jeremy Corbyn described the killings in Gaza as a “slaughter” and criticised the weakness of the response from Britain and other western governments.

“The response from many western governments to this flagrant illegality, including our own – which bears a particular responsibility for a peaceful and just resolution of the Israel-Palestine conflict – has been wholly inadequate. They should take a lead from Israeli peace and justice campaigners: to demand an end to the multiple abuses of human and political rights Palestinians face on a daily basis, the 11-year siege of Gaza, the continuing 50-year occupation of Palestinian territory and the ongoing expansion of illegal settlements,” he said.

In the House of Commons on Tuesday, Conservatives joined opposition MPs in criticising Israel’s actions, although some argued that Hamas shared in the blame by encouraging demonstrators to approach the border with Israel.