‘There’s a need to present a positive alternative to the G8, a different way . . . ’

The local is global for Fermanagh marchers 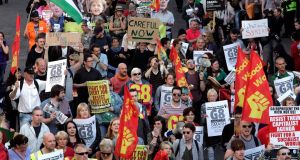 Hundreds gather to protest on the streets of Enniskillen during the 39th G8 summit at Lough Erne Golf Resort in Northern Ireland. Photograph: Photocall

Outside the library in Enniskillen a couple of thousand people, some connected to trade unions, left-wing political parties and environmental groups, have gathered to march two miles towards eight of the most powerful people in the world.

It’s sunny and there’s a carnival atmosphere. There’s a big model of a missile on which is engraved “drop debt not bombs” (apparently it caused a real bomb scare). A man called Frankie Dean wields a rainbow flag and a banner supporting equal marriage – “because terrible things are happening to gay people in Russia, and here in the North we don’t have a fair chance at equal marriage”.

Peter Worth is dressed as a jester “because the G8 is a f***ing joke.” A German girl called Laura Wenigar is distributing a supplement about fracking by Michael Brown. A band plays a spirited rendition of Alternative Ulster.

Localism
Socialist and writer Eamonn McCann believes the localism is a positive thing. “In Seattle and Gleneagles there were these big mobilisations which were trans-European. What you’re seeing more and more are national campaigns and local campaigns. What you’re seeing is people in Greece against what’s happening there.

“In Turkey with what’s happening there . . . people are relating the big issues to what’s happening locally . . . Fracking is a big issue at this demonstration because it affects Fermanagh and Leitrim . . . The old slogan of ‘think globally, act locally’, I can see it here. It’s a healthy development.”

Earlier on Lough Erne the localism was in full effect as a group of local men and women concerned about fracking set out in a flotilla with about 14 barges and boats. There were pirate flags, dogs in bandannas barking at ducks and serious young men distributing Guy Fawkes masks (“He blew up parliament,” said a young man called Ruadhán Msesheainn. “Not that that’s a good thing,” he adds).

There were placards and flags. The slogans varied from the succinct “Ban Fracking” to the philosophical “We inherit the earth from our ancestors, we borrow it from our children” to the postmodern “Down with this sort of thing!”

Why are they protesting? “Fermanagh has lake lands, and not to hit you with a soundbite but we don’t want them to turn into wastelands,” says Mark Flanagan, a civil servant. Earlier the Big If campaign to end world hunger staged an awareness-raising stunt featuring activists dressed as G8 leaders in two Viking longboats.

Small contingent
While buses have come from around the country, Enniskillen has attracted a very small contingent of international protesters. “ ‘My country is the world and my religion is to do good’. That’s a quote from Thomas Paine, ” says Andrew Carnegie, an anti-capitalist campaigner named, he says, after the great Scottish capitalist. Andrew is here with his son Darren and his dog Grace. He’s been to many of the G8 protests. The encampment is literally, as one protester puts it, “eight men and a dog”. “There’s around 1,000 policemen per tent,” observes local Shane Hicks.

“In Gleneagles in 2005 there were about 5,000 people there and they blockaded the roads so the police couldn’t get there,” says Gary from Derby. “I was hoping this would be a similar event in size.”

Chris from Brighton has also seen a few G8 protests. “But at the other G8s there was a callout from local activists. A lot of people in the UK have been waiting for one from here, but there’s been a lack of dialogue.”

Gary and Chris and Andrew were surprised to find the police very accommodating. This morning they were brought tea and coffee, and they’re on first-name terms with PSNI Insp Roy Robinson, who is still mingling with the protesters.

Robinson tells me his job is to “facilitate and help the protesters. If they cause trouble we’ll have to deal with them, but if they’re peaceful they have a warm welcome. And why wouldn’t they be peaceful? Sitting in the most beautiful county in Ireland, the Venice of the north.”

Thousands of police
A cynic might argue that the police can afford to be friendly. There are thousands of them. As I drove from Belfast to Enniskillen there were checkpoints and machine-gun wielding policemen on every bridge.

In the sun of the march, people chant and enjoy themselves and McCann believes numbers are beside the point.