We were all convinced by Margaret Thatcher’s unblinking eyes, which sometimes benefited Ireland, but behind the stare was an artfully concealed pragmatism 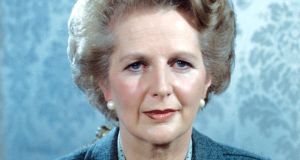 The sight of Margaret Thatcher’s blazing and unblinking eyes, filmed in 1981 and televised again this week, brought it all back again as she vowed never to have dealings with hunger-striking terrorists.

She came across as the ultimate conviction politician, determined to face down the protesting prisoners, determined on principle to reject any thought of defusing the crisis. We were all convinced by those staring, almost scary eyes, but we were all partly wrong. She turned out to have an artfully concealed pragmatic streak that even then was leading her to seek some route out of the hunger-strike impasse.

But three years later she had no resort to histrionics when the IRA blew up the Grand Hotel in Brighton. I had left the hotel a few hours before the explosion that killed five people and almost killed her. I had been there for a nightcap after dining out with a senior Tory in town for the party’s conference, then left for bed a little before midnight. Several members of the cabinet mingled in the bar, dressed in smart dinner suits; they seemed cheerful and understandably cocky, as their leader was on top of the political world, having trounced both Gen Galtieri and Michael Foot.

But within hours much of the hotel was reduced to rubble. Thatcher later remembered being led from the shattered remains, recalling the sensation of having cement, dust and grit in her teeth.

The next day Thatcher did not go over the top at the Tory conference, which she insisted should go ahead. In her speech she projected resolution and steadiness but avoided melodrama.


‘Out, out, out’
But those flashing eyes were back some months later when Garret FitzGerald presented Thatcher with a report on the options for Northern Ireland, and she responded by peremptorily rejecting all of its proposals at her “Out, out, out” press conference. Those words, combined with the almost disdainful Thatcher glare, seemed to most nationalists to go beyond the bounds of diplomatic decency. They generated much anti-British feeling.

At a reception at the Irish Embassy soon afterwards, my wife and I were taken aback at the outspoken anger vented by many of the Irish guests; normally so courteous, they were now furious. Almost everyone in the room felt the admired FitzGerald had been imperiously rebuffed in what almost amounted to a national insult. He had invested much credibility in what many dismissed as a hopeless project.

In fact, she possessed few fundamental convictions about Northern Ireland beyond her obvious unionism, support for the security forces and determination to stand up to IRA violence.

It later emerged that at various stages she had contemplated all sorts of policies, her first choice being unionist majority rule with safeguards for nationalists. She also toyed with full integration with Britain, as urged by Enoch Powell.

Convinced that the Republic could and should be tougher on the IRA, she even contemplated the idea of drawing a whole new frontier. A senior official later revealed: “She thought that if we had a straight-line Border – not one with all those kinks and wiggles in it – it would be easier to defend.”

She was able to hold some surprising personal views, once writing of Bobby Sands: “It was possible to admire the courage of Sands and the other hunger strikers who died, but not to sympathise with their murderous cause.”

And, oddly enough, her taoiseach of choice, at least to begin with, was not FitzGerald but the “tough, able and astute” Charles Haughey. She wrote: “I found him easy to get on with, less talkative and more realistic than FitzGerald.”

FitzGerald, for his part, was disconcerted by the way she would sometimes call him “Gareth”, once remarking, “She seems to think I’m Welsh.”

She might not have gone down the Anglo-Irish road if unionists had come up with realistic alternatives rather than simply telling her to sit tight. Although she loved the union she found it hard to love unionists, finding their patriotism “too narrow”.

Thatcher did recognise that her “Out, out, out” speech had hurt and damaged FitzGerald, and set out to make amends. She came to appreciate, too, the dangers of the substantial rise in the Sinn Féin vote after the hunger strike.

I never, however, heard that anyone had the nerve to argue to her face that the rise of Sinn Féin could be attributed to her own perceived intransigence.

A Tory source (my Brighton dining companion) did pass on to her the warning about the Sinn Féin surge that Jim Prior, the Northern Ireland secretary, had delivered to a private meeting of Conservative MPs. Prior told them: “The island of Ireland could become a Cuba off our western coast. What on earth would we do?”

In fact, the two sets of high-powered diplomats worked so closely together that they practically became a team: some of the Dublin men were occasionally to be seen moving, slightly furtively, around London, going to meetings in Whitehall.

In the end all these factors combined to persuade her that doing nothing was not an option and that an Anglo-Irish approach was worth trying. There was, she concluded, no alternative. She viewed the eventual result, the 1985 Anglo-Irish Agreement, as being primarily about security. “That was her approach to the whole issue,” said the person who revealed her dislike of the Border’s wiggles. “It was security first, second and third.”


Contact with McGuinness
Still, she did not display complete rigidity about the IRA, approving an MI5 request that exploratory contact should take place with Martin McGuinness. Many messages went backwards and forwards along this channel, demonstrating that her policies could be said to have their own kinks and wiggles.

Although she would later grumble that the agreement had not been a great idea, it had the lasting effect of lodging an Irish dimension into how Northern Ireland was governed. This opened the way for later, highly productive prime-ministerial relationships – Albert Reynolds and John Major; Bertie Ahern and Tony Blair – that kept the peace process moving along.

Thatcher would probably have approved of the process, even though she must have had a great many reservations. But she would have rejoiced in the reduction in violence and the eventual disappearance of the IRA.

Still, it would have been fascinating if, in recent years, she had been asked how she felt about McGuinness today holding a senior role in government. Those famous eyes would surely have blazed anew.


David McKittrick has been reporting on Northern Ireland since the 1970 . He is one of the authors of the work Lost Live s.