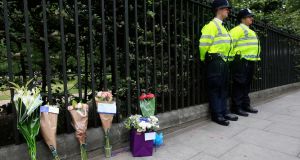 Floral tributes rest against railings near the scene of a stabbing in Russell Square, London, in which a woman was killed and five people injured. Photograph: Jonathan Brady/PA Wire

British police yesterday appeared to rule out a terrorist motive for a multiple stabbing in London’s Russell Square, which left one woman dead and five injured. Police said a 19-year-old Norwegian national arrested in connection with the incident had mental health issues, with no evidence of terrorist links.

“I emphasise that so far we have found no evidence of radicalisation that would suggest the man in our custody is in any way motivated by terrorism,” said Mark Rowley, Britain’s most senior counter-terrorism officer.

“The suspect is a Norwegian national, of Somali origin. I stress though that all the work we have done so far does not suggest that those factors in his background are relevant to the motivation for his actions.”

The stabbings took place about 10.30pm on Wednesday in an apparently spontaneous rampage in a part of London popular with tourists. The dead woman was an American in her 60s and the injured are Australian, American, Israeli and British. The London Ambulance Service said paramedics had given the woman who died “extensive treatment” but she could not be saved.

Police officers were on the scene within six minutes of the attack and they immobilised the suspect using a Taser. Although counter-terrorism officers were called to the scene soon after the stabbing, Metropolitan Police Commissioner Bernard Hogan-Howe said the investigation was focused on the suspect’s mental health.

“My thoughts are with the family of the woman who was murdered and those who were injured. A normal night out in our busy capital has ended in horrific circumstances. Our investigation is moving very quickly and our detectives have been working hard throughout the night. As we have already made clear, mental health remains a substantial focus for our investigation,” he said.

Earlier this week Sir Bernard announced that Scotland Yard has begun to put 600 extra armed police on London’s streets in response to worries about the threat of Islamic State-linked terror attacks.

“Across our capital today you will see more police officers, armed and unarmed, to reassure the public after recent events overseas. We will protect our capital and those who live, work and visit our city,” Sir Bernard said.

Jo Loughran of Time to Change, a campaign to combat stigma surrounding mental illness, on Thursday called for “informed and balanced” reporting of any mental health element to the Russell Square attacks.

“There have been a number of horrendous acts of violence committed across Europe over recent weeks. As the media look to unpick these extremely complex incidents to explore motivations and reason we urge journalists and editors to provide well informed and balanced coverage of mental health. Millions of people experience mental health problems every year and the overwhelming majority will never pose a risk to others,” she said.