Taskforce to take over council services after Grenfell Tower fire 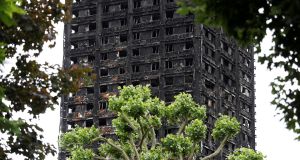 A specialist taskforce is to be sent in to Kensington and Chelsea council to take over the running of key services following the Grenfell Tower fire.

The communities secretary, Sajid Javid, has announced an independent recovery taskforce to help the borough cope.

It is expected to manage the council’s housing, regeneration, community engagement and governance services.

Javid said: “The scale of the recovery effort needed on the Lancaster West estate in the months to come cannot be underestimated

“This intervention is putting in place the foundations that will support the longer-term recovery.”

Meanwhile police investigating the fire have recovered 87 sets of human remains but cannot confirm they are from 87 individuals.

In an update on the investigation the Metropolitan police commander Stuart Cundy said: “In total we have made 87 recoveries, but I must stress that the catastrophic damage inside Grenfell Tower means that is not 87 people.”

He added: “Until formal identification has been completed to the coroner’s satisfaction I cannot say how many people have now been recovered.”

Details of the council move, which follows heavy criticism of the their response to the disaster, will be confirmed in a written statement to MPs.

The new team is expected to be phased in as the current Grenfell Tower response team is gradually wound down.

It is understood that Javid will make an oral statement to the Commons after prime minister’s questions to give more details about the plan.

The taskforce stops short of demands from the shadow communities secretary, Andrew Gwynne, and London mayor, Sadiq Khan, for ministers to appoint external commissioners to take over the running of the whole council.

It amounts to another admission of the scale of the failure at what was regarded as an effective council until the fire, but Labour said it did not go far enough.

It follows the departure of the chief executive Nicholas Holgate a week after the fire and then, after much criticism, the resignation of council leader Nicholas Paget-Brown and his deputy and housing chief, Rock Feilding-Mellen.

A team from other councils was ordered into the council days after the fire to deal with the emergency response.

The Grenfell Response Team admitted today that only 14 of the 158 families evacuated from the tower and nearby Grenfell Walk had accepted offers of temporary accommodation.