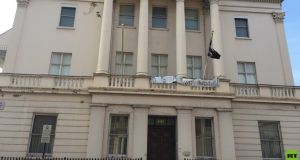 The Eaton Square property bought by Andrey Goncharenko with a Autonomous Nation of Anarchist Libertarians flag outside. Photograph: Joana Ramiro/RT via Twitter

A group of squatters has occupied an empty £15 million (€17.5 million) central London property purchased by a Russian oligarch in 2014 and opened it as a homeless shelter.

The extensive, five-storey Grade ll-listed Eaton Square property was bought by Andrey Goncharenko, a little-known oligarch who has bought a number of luxury properties in London in recent years.

The squatters - Autonomous Nation of Anarchist Libertarians - said they entered the building through an open window on January 23rd and have accommodated about 25 homeless people so far, many of whom had been sleeping rough around Victoria station.

Tom Fox (23) one of the squatters, said: “It is criminal that there are so many homeless people and at the same time so many empty buildings. Our occupation is highlighting this injustice.”

New rough sleeper figures for the city published this week have revealed an increase of 16 per cent from last year, to more than 4,000.

More than 200,000 homes have been empty for more than six months, according to new government figures.

Mr Fox said the group had set up a projector so they could hold movie nights, are collecting portable cookers to provide food for homeless people and are planning to host talks about homelessness and other issues. They have also established a free shop offering clothing.

The building dates back to the 1820s and has numerous listed features including many ornate, hand-carved fireplaces. Planning permission has been granted for a swimming pool in the basement and an extension.

One homeless mother and daughter who had been sleeping around Victoria station said they were delighted to have been offered shelter in the oligarch’s home. “Westminster council wants to send homeless people like us out of London and there isn’t much provision around for homeless women,” she said.

Mr Goncharenko’s representatives, MCA Shipping Ltd, based in Gibraltar, have sought a possession order in the central London county court and a hearing is scheduled for January 31st.

The 1,329 square metre property, which has polished parquet floors, tasteful uplighting and a grand, spiral staircase, is in the heart of Belgravia and a stone’s throw from Buckingham Palace.

A banner above the front door reads ‘USA ANTI-GOVERNMENT IN EXILE’, and a black flag displays the words ‘Antifaschistische Aktion’, a European anti-fascist network.

According to court documents seen by the Guardian, the freehold is owned by the Grosvenor estate. The property was built in around 1825 by the Grosvenor family and was until recently the home of the Spanish cultural centre Instituto Cervantes, which has moved to The Strand.

Planning permission submitted last June also proposed staff bedroom suites, a laundry, service kitchen, gym and a leisure suite in the basement. It also requested a change of use to a single family home.

The house is one of four purchased by Mr Goncharenko over a three-year period, including Hanover Lodge, in Regent’s Park, for which he paid £120 million - making it one of the UK’s most expensive homes.

The businessman is obscure by the flamboyant standards of Russian oligarchs. He is described as the chief executive of a subsidiary of Gazprom, the country’s biggest and best-connected gas company.

In 2011 a gossip columnist reported that he had hosted a lavish party in the south of France, a favourite summer destination for Moscow’s super-rich. The venue was Le Palm Beach, a casino in Cannes, and the guests were described as “secretive and completely unknown billionaires”.

Cyprus blocks EU sanctions on Belarus over rigged election 17:17
Deaths of hundreds of elephants may have been caused by toxic algae 16:45
Downing Street denies reports Boris Johnson went on secret Italy trip 16:07
UK warned it could have 50,000 coronavirus cases a day by mid-October 12:19
Coronavirus: New Zealand to begin lifting restrictions 07:53