French election to be showdown between Macron and Le Pen 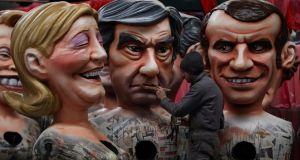 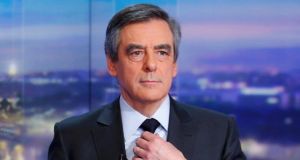 Francois Fillon: his wife Penelope was paid €500,000 plus another €100,000 over eight years for what appear to have been phoney jobs. Photograph: Pierre Constant/Pool/Reuters

The French presidential campaign appears to be headed for a contest between Marine Le Pen, the leader of the extreme right-wing Front National (FN) and Emmanuel Macron, a former banker and economy minister with roots in the Socialist Party, who refused to stand in the socialist primary.

Le Pen says she expects to face Macron in the May 7th runoff, and that it would be “the ideal configuration” for her. At a time when globalisation is massively rejected by the French, she calls herself “an uninhibited patriot” and describes Macron as the candidate of banks, high finance and globalisation – the argument that Donald Trump used against Hillary Clinton.

Le Pen claims to have inspired Trump. “I don’t take Trump as a model; it is he who has undertaken what I’ve been proposing for years, and which our political opponents always considered absurd,” she told La Voix du Nord newspaper.

A Le Pen-Macron match became almost inevitable this week, when the former frontrunner and candidate of the conservative Les Républicains (LR), François Fillon, was discredited by the revelation that his wife Penelope was paid €500,000 plus another €100,000 over eight years for what appear to have been phoney jobs as a parliamentary assistant and as an adviser to a millionaire magazine owner.

In the other main development of the week, Benoit Hamon and former prime minister Manuel Valls campaigned for the second round of the socialist primary, which will take place on Sunday.

Hamon, from the left of the left, won 36.63 per cent of the vote in the first round, compared to 31.9 per cent for Valls. Hamon is expected to win on Sunday night, and to use the nomination to seize leadership of the ailing party. He is extremely unlikely to survive the first round of the presidential election on April 23rd.

“Penelope-gate” and the socialist primary strengthen Macron’s chances of reaching the runoff.

The Fillon scandal seems to confirm Le Pen’s old harangue that establishment politicians are “all rotten”. She is not exploiting it because she is herself under investigation by the EU’s anti-corruption agency Olaf, for allegedly using funds allotted to MEPs for hiring parliamentary assistants to pay FN party workers instead.

An Odoxa poll taken after the Fillon scandal broke shows his popularity rating has plummeted from 54 per cent when he won the LR nomination in November, to 38 per cent at present. Some Fillon voters may transfer their loyalty to Le Pen, but a more significant number are expected to favour Macron, whose economic liberalism appeals to conservatives.

Disappointed Valls voters, and socialists desperate to see someone with left-wing sensibilities in the run-off, are more likely to vote for Macron than the official socialist candidate.

Le Pen glories in the term “populist”. She promises to pursue Trump-like protectionism and make demands for restoration of French “sovereignty” that could spell the unravelling of the EU.

Macron believes in Europe and free trade. Moreover, he is, in the words of Franz-Olivier Giesbert, the editor of Le Point magazine and the biographer of several French presidents, “the Hollywood prototype of an affluent young man, clean-cut, who succeeds at everything”.

But would the articulate, well-educated Macron (39) be able to hold his own in a debate with Le Pen (48), a hardened politician with the force of a Panzer tank?

In the meantime, attention focuses on the Fillon saga. The LR candidate dug the hole deeper in a prime time television interview on Thursday night, in which he asserted that Penelope “corrected my speeches, represented me in associations, did press reviews”. The average salary for a parliamentary assistant is €2,800 per month. Penelope Fillon was paid between €3,900 and €7,900 monthly.

Fillon also admitted he had used Senate funds to pay two lawyer sons. He has promised to withdraw from the campaign if he is mis en examen or officially charged.

The anti-corruption office on Friday interviewed Marc Ladreit de Lacharrière, the magazine owner who paid Penelope Fillon €100,000 for two short articles. He claimed to have hired her for a “mission of reflection”.

Michel Crépu, who was director of the magazine, said Lacharrière’s statement was absurd, that logic would have dictated that he be told Ms Fillon had been hired.

Christine Kelly, who published an authorised biography of François Fillon in 2007, was also heard as a witness. Kelly said she had not the slightest inkling that Ms Fillon was employed. She said she was threatened this week and told to keep quiet.

Privately, LR officials cast doubt on Fillon’s ability to continue the campaign. They face the prospect of scrambling to replace him. Alain Juppé, who came in second in the LR primary, on Friday ruled out “clearly and definitvely” becoming the fallback candidate if Fillon pulls out of the race.