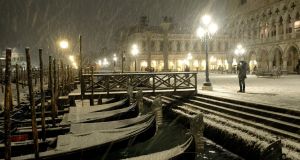 Gondolas pictured during snowfall in the Venice lagoon, northern Italy, on January 13th. The death by drowning of a Gambian man in the freezing waters of the city’s Grand Canal last Sunday has prompoted questions about whether more could have been done to try to save him. Photograph: Manuel Silvestri/Reuters

When the vaporetto sailed past the drowning Sabbaly in the freezing waters of the Canale Grande, at first not everyone understood the tragic nature of the drama. Given that it will shortly be Carnevale time at Venice, some people thought the man’s predicament might be some sort of publicity prank.

Mobile phone footage of the incident, however, shows that people both on the canal bridge and on the vaporetto soon realised that the man was in difficulty.    Against a background of noisy “advice” from those on the canal banks, the vaporetto personnel threw four life-rings into the freezing water.

Even though, at least two of the rings landed right beside him, Mr Sabbaly made no attempt to reach for them. Instead, he is seen to raise both his arms straight to the sky before he disappears beneath the surface of the water.

This gesture suggested that he had opted to take his own life. Bystanders watching the attempted rescue can be heard to say: “This guy has to be stupid.  He wants to drown...”

No one jumped into the icy canal to attempt to save Mr Sabbaly, a circumstance which prompted influential Catholic weekly, Famiglia Cristiana, to observe yesterday: “Is it not scandalous that no one jumped into the freezing waters of the Canale Grande, risking their own life to save another?  And is it not true... that if it had been a white man in the water, a ‘hero’ would have emerged?”

Famiglia Cristiana also reports that some of those present at the drowning were heard to shout heartless and racist comments such as “Go on, Africa, that way you’ll go home.”

When Mr Sabbaly’s body was pulled out of the canal some hours later by police divers, a sealed plastic container with his documents inside was found strapped to his body. It seems that he had a legitimate residence permit of the type normally granted to political refugees, whilst he had entered Italy as a “boat person” via the Sicilian port of Pozzallo in 2015.

The young migrant had left his rucksack on the canal bank before he jumped – or fell – into the water. The rucksack contained little other than a Milan-Venice train ticket of the day before.  On Friday, the mayor of Venice Luigi Brugnaro said the municipality would pay the burial expenses for Mr Sabbaly’s funeral, adding: “This is simply a gesture of respect towards Pateh Sabbaly and his broken dreams...This young man’s death has left us all feeling very sad.”

Italy remains very much at the centre of the Mediterranean migrant crisis with 181,000 migrants arriving there by boat in 2016, 18 per cent more than in 2015.