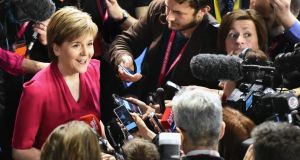 The Scottish National Party has redrawn the political map of Britain with a landslide victory that all but wiped out Labour north of the border.

All but three of Scotland’s 59 seats were won by the SNP, whose commanding vote ousted Scottish Labour leader Jim Murphy and prominent Liberal Democrats. The spectacular surge for Nicola Sturgeon’s party cast fresh doubts on the future of the union and put pressure on London to make further moves towards greater autonomy for the Scots.

Clear double-digit victory margins were a feature of the SNP’s performance. Its candidate won by 10,000 votes in Kirkcaldy and Cowdenbeath, which was once seen as Labour’s safest seat in the country, and which had been held by former prime minister Gordon Brown. In Glasgow North East the swing to the SNP was a record 39 per cent.

“The Scottish Lion has roared this morning across the country,” said former SNP leader Alex Salmond, who was elected in Gordon. Ms Sturgeon, his successor, said the results were “historic” and that she was “immensely proud” of her party’s candidates.

Labour leader Ed Miliband, whose partly was reduced to one MP in its former stronghold, said his party had been “overwhelmed” by a “surge of nationalism” in Scotland.

The result is by far the most successful in the SNP’s history. Its previous best was in 1974, when it won 11 seats. The party won six seats in 2010.

In Glasgow it had a clean sweep of all seven seats, defeating Labour’s shadow Scottish secretary Margaret Curran in the process.

Across Scotland it claimed seats that had been in Labour or Lib Dem hands for decades. Kilmarnock and Loudoun, a Labour seat for the past 18 years, elected the SNP’s Alan Brown with 30,000 votes – almost double the number of votes that went to the shadow economic secretary Cathy Jamieson. Another scalp was the Lib Dem employment minister, who was defeated by the SNP candidate John Nicolson in East Dunbartonshire.

Turnout was high across Scotland, with several constituencies reporting turnouts in excess on 70 per cent and some at more than 80 per cent.

Ms Sturgeon said that never in her “wildest dreams” would she have imagined her party could win 56 out of 59 seats. “The tectonic plates of Scottish politics shifted yesterday – it is a historic result,” she said.

Ms Sturgeon said the London government could not ignore what had happened in Scotland. However, she stopped short of saying her party would call for another referendum on independence before next year’s assembly elections.

The only seats the SNP missed out on were Orkney and Shetland, Edinburgh South and Dumfriesshire, Clydesdale and Tweeddale, where Liberal Democrat Alistair Carmichael, Labour’s Ian Murray and Conservative David Mundell held on.

But in a warning to Ms Sturgeon, he said: “This is of course an enormous moment for the SNP; no one can deny that. With victory on this scale, of course, also comes a responsibility. No one should ever confuse nationalism for their nation, no one should mistake your party for your country, because our nation, our streets, our flag won’t ever belong to one particular party or one particular cause.”