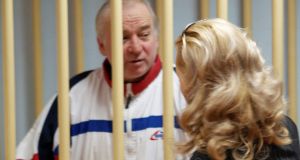 File photograph of Sergei Skripal at a hearing at the Moscow military district court, Russia, in August 2006. File photograph: Kommersant/Yuri Senatorov via Reuters

The former Russian spy Sergei Skripal was deliberately poisoned with a nerve agent in a case that is now being treated as attempted murder, the police counter-terrorism chief has said.

Scotland Yard assistant chief commissioner Mark Rowley said the police officer who was first to the spot where Mr Skripal was found in Salisbury, in the south of England, on Sunday afternoon was “seriously ill” in hospital.

Describing the poisoning of Mr Skripal (66) and his daughter Yulia (33), as a major incident, Mr Rowley said scientists had identified the substance used. He refused to reveal what the specific poison was.

All three victims were suffering from “exposure to a nerve agent”, he said. Detectives now believed that Sergei and Yulia Skripal were targeted in a deliberate act. They remained critically ill in hospital on Wednesday night.

Although further details are awaited, the suspicion in Downing Street will be that the Kremlin has attempted another brazen assassination operation on British soil. Moscow will furiously deny involvement, but prime minister Theresa May will have to consider how the government might respond should the police and other evidence point to Russia and its multiple spy outfits.

Unlike in the case of Alexander Litvinenko, poisoned with a slow-acting cup of tea, detectives got to the scene in Salisbury quickly. Hundreds of officers were now working around the clock, Mr Rowley said. They were examining CCTV footage from the city centre and building a detailed timeline of events, he added.

An unidentified man and a woman spotted strolling in the alleyway close to the bench where Mr Skripal and his daughter were poisoned are likely to be of intense police interest. The woman has blond hair and was holding a large scarlet bag. CCTV captured them around the time Mr Skripal collapsed.

Scientists at Porton Down have assisted in the investigation, which is being led by Scotland Yard’s counter-terrorism command, SO15, with significant help from the intelligence agencies.

The investigation comprises multiple strands. Among them is whether there is any more of the nerve agent in the UK, and where it came from. Intelligence sources said on Wednesday they were so far maintaining an open mind about motives and where responsibility for the attack rested.

The medical and chemical evidence and the effects on the victims point to a sophisticated nerve toxin. The best known are VX and sarin.

Chemical weapons experts said it was almost impossible to make nerve agents without training and dismissed the theory that an amateur could have assembled the substance using materials obtained from the internet.

“This needs expertise and a special place to make it or you will kill yourself. It’s only a small amount, but you don’t make this in your kitchen,” one said, speaking on condition of anonymity.

Hamish de Bretton-Gordon, a former commanding officer at the UK’s chemical, biological and nuclear regiment, said nerve agents such as sarin and VX had to be made in a laboratory: “It is not an insufficient task. Not even the so-called Islamic State could do it.”

Richard Guthrie, another chemical weapons expert, said: “Nerve agents, such as sarin or VX, require some fairly complicated chemistry using certain highly reactive chemicals. Small quantities could be made in a well-equipped laboratory with an experienced analytical chemist. To carry out the reactions in a domestic kitchen would be essentially impossible. Moreover, sarin is odourless, colourless and tasteless. Any tiny leaks of its vapour would be potentially fatal.”

Dame Sally Davies, the chief medical officer for England, said on Wednesday the risk to public health from the incident was low. Decontamination work has been undertaken to make areas feared to have been affected by the poison safe.

The British government’s most pressing problem is how to formulate a political response if the trail – once again – leads back to Moscow. In previous eras, it might have been possible for rogue elements to lay their hands on toxic substances. But it is now unlikely that any operation to murder a defector could originate in Russia without a degree of official permission.

One former senior Foreign Office adviser suggested the Kremlin was taking advantage of the UK’s lack of allies in the US and EU, and its inability to do much about the Skripal case. He said the British government was in a “weaker position” than in 2006 when the two assassins sent by the FSB spy agency poisoned Litvinenko using radioactive polonium.

The adviser said the use of a nerve agent suggested a state operation, adding that its deployment in the centre of a sleepy cathedral city on a Sunday afternoon was “brazen”. “It says a lot about how seriously [the Russians] take us that they feel able to do something like this,” the former adviser said.

Sources close to British intelligence said further toxicology tests would be key in the days ahead. They warned that other factors or triggers might have been involved.

There was renewed activity in Salisbury on Wednesday afternoon as around a dozen police cars, fire engines and ambulances arrived in the city centre. Attention was focused on Sarum House, next door to the Zizzi restaurant, one of the locations sealed off by police. A dark-haired woman was escorted out by police officers and put in an ambulance.

Mr Skripal and his daughter were found slumped on a bench in Salisbury on Sunday afternoon.

It has emerged that the pair had been in the city centre since 1.30pm, almost three hours before they collapsed

The Metropolitan police said on Tuesday that due to the “unusual circumstances” its counter-terrorism unit would lead the investigation. – Guardian